Tales From the Shadow Booth Volume 2 - Edited by Dan Coxon

The Shadow Booth edited by Dan Coxon, is a new journal of weird and eerie fiction and after reading the excellent Fortune Box by Madeleine Swann I have gotten a taste for weird fiction that is hard to classify. 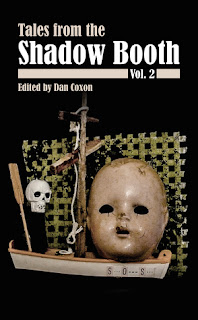 This is the second volume from ShadowBooth. I haven't read the first yet, but after I finished this I immediately downloaded the first instalment.

Volume 2 features 12 short stories by many authors you will recognise if you' re  a fan of creepy horror fiction. I have to say the range of styles and subjects in this volume is huge. All tastes are catered for. This is a really impressive collection.

My ultimate favourites included; We Are the Disease, Monkeys on the Beach and Cave Venus et Stella. That's not to say I didn't enjoy the others,  it's just that this anthology has a very strong line up.

This was delightfully creepy creepy, particularly the descriptions of  Buddy. For me this is a slow burner but the wait is worth it. There are things that Heather wants to put behind her and Halloween marks an important milestone for her, one year since she lost her unborn son. Can't get over it can't forget it, she tries to move on but it's like he's there and he wants something from Mummy...


We are the Diesease by Gareth E.Rees

This one really worked for me. I also think it could be made into truly terrifying film.
What we continue to do on our little blue planet never fails to shock at scare me. Whenever I read a distopian tale I always wonder how far off these ficitonal scenarios will differ from what will happen eventually. There's a great foreboding atmosphere pulsing thporugohut this tale. This tale felt really claustopohic and there's something about epedetions to the wilder climates of our planet such as the Artic that really scare me. What do we really know about these places? What could be lurking htere in wait?


I really liked the style of this tale, the stryle felt really natural which makes the content more creepy.
What starts off as a fun lad holiday of two logn term mates quickly descends into hellish conditions.


My Father's Face by Giovanna Repetto (translated by Amanda Blee)

This is a really cool tale full of mystery and a herat of darkness. A young man orphaned in childhood has important questions about his past which eludes him. No one wants him to know the truth, maybe his memories are repressed for good reason.

Ear to Ear by Aliya Whiteley

A tale which is most definitely eerie. I don't think I've read anything like this before. Barbara, a young girl from a small town will do anything to fit in.  She wants to be normal, just like them and when Mrs Eddison's book club decide to intervene Barbara follows their advice a little too closely.

This tale has a definite Angela Carter feel to it, if you haven't read The Bloody Chamber, do so. This is a haunted house tale like no other.

I really liked this tale the perfect blend of eerie and horror. A young man along with his friends go back to the site of their youth where their favourite festival was situated. It's all long gone now but every year they go and camp to remember the good old days, before the pain of losing Lewis.

This is set out like an article warning of the Mami Wata a supernatural water entity who takes human lovers. Except the article is really scary!

This was a really cool tale fusing horror and fantasy. Set in Scotland in a small forgotten town, the locals are undertaking an important task after the war. Harvesting babies form shark pouches to fight another war, bleak and eerie.


Monkeys on the Beach by Ralph Robert Moore

The whole time I was reading this tale I was scremaing at the family to go home! This was really scary I knew something bad was going to happen and the tension was unbearable.

I think this has to be my favourite out of a strong bunch. A young carpenter is hired for work in a very strange street that although pristine in appearance seems deserted. Don't want to say too much about this tale and ruin it for those yet to read it but deliciously dark!

The Joanne by Johnny Mains

Samuel takes the voyage of his life aboard the Joanne. He definitely should have stayed at home!
Posted by S.J.Budd at 04:39