Even if you're not a big horror fan or even a keen reader, you probably familiar with Stephen King, unless you live in a cave, in another planet, in a different dimension.

Stephen King has had the sort of  career that makes most aspiring writers weep. To date he has written and published more than 50( yes 50!) books, ALL of them have been WORLDWIDE bestsellers. If that doesn't make you slightly jealous as a aspiring author, many of these has also been made into incredibly successful films. It's enough to make me weep, but he's not a bad guy.

What really strikes me about this book was his  touching motivation to write this. Of course he's been paid to do it, but I think it's really generous and kind hearted to write about the craft of writing. I can't think of any other hugely successful writer that has done this. 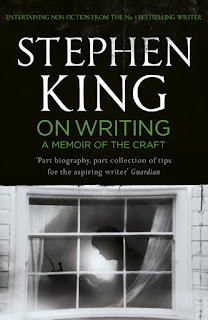 With so many 'how to write' books out there, ask yourself this; how many have been written by a multiple best selling author? Whatever you may feel about his books, he knows how to write.

This book does not fail to deliver, this book is full of surprising tips and insights. I guarantee that if you read this book you will experience many light bulb moments when suddenly everything makes sense.

He also explains how he dealt with rejection, that every writer has to deal with rejection. Even when you're Stephen King. He teaches you through his biography that it's not just talent that a writer requires but also unflinching uncompromising determination.

Whilst reading I had a few light bulb moments of my own when I realised there were things that me and Mr Stephen King have in common, such as the experience where suddenly two ideas join and become one amazing idea. This can only be a good sign right? He is able to put into words the things I love about writing, particularly his concept of  'thinking above the curve' and explains why your characters sometimes play up like rebellious teenagers and do their own thing, with or without your permission.

The key points I took away from this book are

So if you want to take your writing further, you should probably read this book.

A Guide to Subgenres in Fantasy Fiction

If you think that fantasy fiction is only about dragons and wizards you'll be in for a shock. The genre of fantasy is, well, fantastically diverse and all encompassing. Fantasy has always  been my favourite literary genre as it's one that's not hemmed in by reality. You can create a whole new world with new creatures and generally turn everything upside down, left and right, and back again. The fantasy writer has the greatest power to create.

Fantasy differs to its cousin genres of Horror and Science Fiction with it's absence of dark and scientific themes. Though they can and do quite often overlap such as the Alien films, with great effect.

There's so many sub genres within fantasy fiction. Some of these I've never heard of before but can't wait to explore them all.

Please note this article is a work in progress, this list is impossibly long! So it will take time, so starting at A.......

If you're a writer of alternative historical fiction, or would like to know more about it, there's a great website and magazine Alt Hist, http://althistfiction.com

If you would like to submit your short stories to them for consideration, you can do so  at http://althisfiction.com/submissions/

This fantasy fiction subgenre is pretty straightforward and centres around the legends surrounding Camelot, King Arthur and of course, Merlin.

Marion Zimmer Bradley ~ The Avalon Series - The Mists of Avalon, The Forest House, Lady of Avalon.

The Avalon series is an absolute triumph and really defines the genre. It is compelling and told through the perspective of the female characters of the Arthurian Legends such as Morgan le Fey and the lady in the lake.

This is a brilliant series which is technically a quintet if you include The Wicked Day and The Prince and the Pilgrim.
The first three novels, The Crystal Cave, The Hollow Hills and The Last Enchantment retell the legend from the perspective of Merlin, from his early childhood to adulthood.

Celtic fantasy fiction often features customs, folklore of the ancient race of celtic people who hailed from the British Isles such as Ireland, Scotland, Wales and Cornwall.

Juliet Marillier -  An incredibly accomplished author who has written numerous books but a good place to start is The Sevenwaters Series, Daughter of the Forest, Son of the Shadows, Child of the Prophecy, Heir to Sevenwaters, Seer of Sevenwaters, Flame of Sevenwaters.

These are a series of novels set in 9th century Ireland and Britain as well as the people of the Otherworld.

Lisa.L.Spangenberg is a digital medievalist and has a fantastic website dedicated to all things Celtic. This is an incredible resource for writers of this genre and also very interesting for those who like me are fascinated by anything Celtic.

Click on the link below for book recommendations from her site

Contemporary fantasy fiction is where magic and magical creatures secretly exists in our world. It differs to the horror genre as it is usually uplifting rahter than foreboding.

Dark fantasy fiction is very similar to horror but will possess elements of fantasy.

This is an amazing trilogy. Dark fantasy at its darkest and not one for the fainthearted or very easily offended. Let's just say you wouldn't buy this for your Nan.

Anne Bishop - The Black Jewels Trilogy - Daughter of the Blood, Heir to the Shadows, Queen of the Darkness.

Also described as feminist fantasy fiction and centres around a powerful witch Queen who must defend her throne and herself.

There's simply too many to list here, if you're a writer of dark fantasy and would like to submit your work head over to here for a huge list of magazines seeking your stories.

A fable is a tale where there is a strong moral. They usually feature animals, mythical creatures that have human like qualities such as the ability to speak.

These are sometimes very old tales that draw upon ancient folklore and legends. They usually contain elements of magic fantasy characters such as fairies, witches, goblins, giants, elves and mermaids.

Traditionally these tales have been passed down through generations via word of mouth which is what makes them so special however the brother Grimm set about collecting these stories which they published. The tales include Hansel and Gretal, Snow White, Cinderella, Rapunzel and Rumpelstiltskin.

Hans Christian Andersen wrote his fairy tales but they do draw upon old European folkore and legends, his book contains some very well known tales such as The Little Mermaid, The Red Shoes, The Emperor's New Clothes and Thimbelina

This is a subgenre of fantasy fiction that has a Victorian or Edwardian setting. Gaslamp is different to steampunk fantasy which combines the modern age with the past. The term was coined in 2006 by Kaja Foglio author of comic series, Girl Genius

This is a subgenre of fantasy fiction where the theme is dark and usually features a  lot of violence and lack of morals. It is a moving away of traditional fantasy works which depict medieval life as quaint to how it really was; brutal and unforgiving.

Grimdark Magazine is dedicated to all grimdark fiction, films games and everything in between. They are also looking for your short stories.

Heroic fantasy fiction, as you may have already guessed features tales involving a hero, usually on a quest.

This is an online magazine that is dedicated to the cause of bringing back the golden age of storytelling by promoting short works of heroic fantasy.

J.R.R.Tolkien - The Lord of the Rings
C.S.Lewis - The Chronicles of Narnia

A brilliant website that features all things dedicated to fantasy, science fiction and horror.

This is a branch of fantasy fiction that is set in this world but within a specific time period and will usually incorporate magical elements. This is a very broad genre that often crosses into other fantasy genres such as Celtic fantasy fiction, alternative historical fantasy.

Not many authors can boast of having a subgenre named after them in honour of their work. As yu may have guessed this is named after H.P.Lovecraft who tragically rose to literary fame posthumously. This subgenre strongly overlaps with horror and draws upon the psychological fear of the unknown. This genre also feature strnage creatures strange worlds with dark despairing undertones.

A site dedicated to all things H.P.Lovecraft.

This subgenre apart from being set in medieval times is also usually heavily dominated with witches, wizards, dragons and knights.

This is best described as non-realistic fiction and the term was first coined by author Bruce Sterling. It is described as "the fiction of strangeness." This particular genre borrows from other genres including science fiction and fantasy.

These are fantasy stories set in a modern urban environment.

S.J.Budd is a writer of all things weird and creepy. Previously her tales have been featured on Deandman's Tome,  Sanitarium Magazine, Dark Gothic Resurrected, Liquid Imagination, Aphotic Realm, Aurora Wolf, Aphelion, Blood Moon Rising Magazine, The Wild Hunt, Danse Macabre, Shadows at the Door, Inner Sins, Bewildering Stories, Siren's Call and many more.
She lives at www.sjbudd.co.uk  and  @sjbuddj
Spells and Persuasions, her debut collection of short stories of horror and dark fantasy is available now in paperback and kindle from Amazon