The Stone Road by G.R.Matthews

I was introduced to this book as part of Fantasy Faction's Book Club where we all get together and discuss our favourite books. This time the administrator chose a title that had been self published.

Now I'm going to let you in on a little secret, that yes of course there are a lot of really bad self published books out there, but there are also some really good ones. Since buying a kindle I've bought numerous self published titles for as little as 49p and have enjoyed most of them. Recently I read The Lady of the Helm by T.O.Munro and that was really very good.

I'm going off track a bit here but if you love fantasy fiction and want to read really amazing self published fiction then head over to Mark Lawrence's site where he hosts the annual SPFBO - The Self Published Fantasy Blog-Off in which top bloggers read through the top 273 self published fantasy  novels to determine an overall winner. 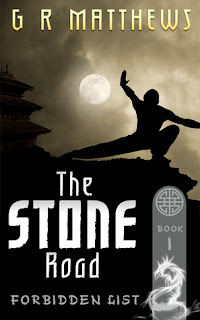 So back to  the Stone Road by G.R.Matthews. This is the first installment of a trilogy called The Forbidden List.

"Everyone knows a family who lost a son to the war. It has to end. But on both sides of the conflict, there are those who value revenge more highly than peace.

Zhou of Wubei is assigned to negotiate the peace. At last, the recognition he so richly deserves will be his. There are obstacles in the way and the offer of an end to thirty years of war may not be as genuine as it first seemed.

Haung, a soldier of Yaart, is trained to be a Jiin-Wei; a spy, warrior, magician. His orders are clear. Ensure the diplomats of Wubei sign the treaty and, by doing so, seal their own destruction. War presents the chance for honour and glory, but the reality is nothing like the stories he's been told."


This tale is set in a world with a strong oriental flavour which is quite unusual as most fantasy stories tend to have a medieval setting. If I'm being completely honest that did put me off a bit but when I began to read it worked really well. There's no boring info dumping in this book, it's pure story and action.

The premise is that there are two provinces, Yaart and Wubei, who have been at war for thirty long years. Both sides are exhausted and when the Duke of Yaart calls for a peace treaty both sides are eager to achieve peace.

We watch these events unfolding through Zhou a junior diplomat from Wubei  trying to secure peace  and Haung a secretive member of the Jiin-Wei in Yaart. Both these characters face many problems which test their loyalties and strengths to breaking point and what's really intersting is how they both deal with their difficulties.

Initially there is a slow build up as we are introduced to the characters but soon it all kicks off.
The plot was really interested and was impossible to predict what was going to happen next which made it an exciting read.

In this cleverly crafted book you'll come across moments both funny and heart wrenching but beware nothing is what it seems either. There's no obvious good guy/bad guy and you'll find yourself sympathising with ll the characters through their good and bad actions.

All in all this is a very fast paced book where fate keeps the characters spinning wildly out of control.

Yoy can find out more about G R Matthews by heading over to his website here
Posted by S.J.Budd at 15:05