Ghost Mine by Hunter Shea 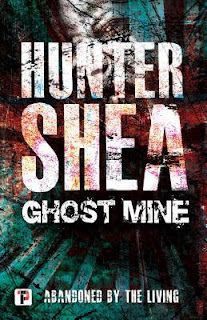 Hey everyone, my latest review, Ghost Mine by Hunter Shea is now live at Aphotic Realm!
Posted by S.J.Budd at 04:53 2 comments: 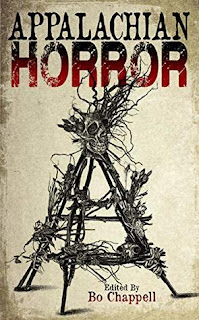 I just love reading horror anthologies, especially themed ones. I'd just finished with Crystal Lake's Welcome to the Show, themed around a legendary music venue in San Francisco which blew me away. Appalachian Horror from Bo Chapell and Aphotic which followed next had a lot to live up to.

The area has long been a source of myths and legends which have been passed down the generations from the early settlers. It's home to Bigfoot, eerie lights, moon-eyed people, witches, monsters and many many ghosts. A perfect setting for horror to take place. (click here for more info)

This anthology is comprised of 8 tales with a lot of recognisable names from the indie horror scene. Whilst reading this, I was really reminded of The Ritual by Adam Nevill. A brilliant book I urge you to read at once.It's based around four old friends hiking in the Swedish forests where they ultimately get lost and find themselves becoming hunted.

I really enjoyed this anthology, there wasn't even one story in here that I didn't care for and ended up reading this in one go as it was so good. Bo Chappell, Aphotic Realm and all the featured authors  have really out done themselves

Hands down this was my favourite tale and was such a powerful opener for the anthology. It was really creepy and told in such a powerful way. In fact I reads this twice straightaway as I loved it so much. Two friends Merlin and Nugget get lost on the Appalachian Trail when they realise they are being followed...

Robin, a free lance photographer  arrives in Chamlett to document the poverty in Appalachia hoping to make a quick buck. There she meets a farmer whop is somehow thriving whilst the town around him falls to ruin. A really well written creepy tale. The plot is really original which builds up to a surprising ending.

Two friends embark on a hunting mission. Having no luck out in the open they decide to go into the forest near Stepp Branch which was once home to a notorious witch who once plagued the land. However it was all a long time ago there's no way she could still be alive.

This is one of those tales where you want to scream at the main characters to stop and turn around but of course it's  no use. This was a super dark folk horror tale with a wicked ending.

The Town of Afurisit by Charity Langley

I had no idea where this tale was going to go making it a really thrilling read. Can't wait to read more by this author.

Summer Price has been selected by her tutor to a free mini break deep in Appalachia. She has a paper due on the history of the region and she has no idea how she is going to pass it. She's hoping a break there will provide her with some much needed answers.

A father living out in the wild with his daughter knows trouble is ahead when he starts finding dead bodies on his farm. Trouble is they won't stay still.

There's a great sense of foreboding danger to this tale which just gets darker and darker as the tale progresses. It will pull at your hear strings as much as it will scare you.

The events of what took place many years ago are finally recounted by a son trying to explain what happened to his family one fateful summer. Another one of my faves the events all weave together perfectly and the ending is amazing.

I've read a lot by Renee and was really excited to see she had a story in here. Like with her longer tales Eat the Rich and Church her dark dark sense of humour is present, making her stories really creepy and plausible.

Carly takes a break in Appalachia after a bad break-up. She's broken-hearted but she's not going to spend her vacation lying in bed and feeling sorry for herself. She wants to explore the reportedly cursed ghost town nearby despite the warnings.

Friends and family of Alan thought it would do him the world of good to go hiking on the Appalachian Trail after the death of his beloved wife, Julia. They hope he'll find himself and come back to them as he once was...

Before he embarks, Alan's brother gifts him with a journal to take with him so that they can read through it together upon his return. Little did he know that reading that journal will be the hardest thing he's ever had to do, but he needs to if he's ever to know what really happened out there.