Eat the Rich by Renee Miller

I first became familiar with Renee Miller after reading Church, which was really fantastic, it kept me on the edge of my seat the whole way through and Eat the Rich is no exception. 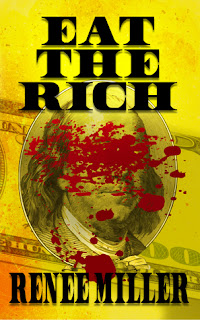 "When Ed Anderson discards his life to become a homeless person, he has no idea of the shit storm about to happen. Almost overnight, the city's homeless population spikes.So does the murder rate.Ed learns that aliens posing as homeless people are eating the city's wealthiest residents. He tries to warn the police, but they think he's crazy.The situation is worse than Ed describes, though.He's right about the aliens. They're here to free humans from wealth and poverty. The flesh of the rich is just a tasty reward for their hard work. And if humans refuse to embrace the utopia imagined for them, there is a plan B:~KILL EVERYONE."

Eat the Rich from Hindered Souls Press, is based on an alien invasion like no other. It's told from both sides, the aliens and the unfortunate humans involved. Each chapter is based around a different character's who all have their own distinct personalities. I particularly liked Marin, the no-nonsense straight talking detective trying to make sense of mounting cases of mysterious murders where only the bones are left.

Of course we know what's going on as the reader which makes the book really fun. What I also liked is the very dark sense of humour prevailing throughout. I think we've all had fantasies of toppling the 1% of the population who own 99% of the world's wealth, but this book questions how would that scenario actually play out. Capitalism is always thought of as an evil force but are there any better alternatives right now?

So, back to the story a group of alien covertly launch an invasion. They come looking for human meat but only the very rich can satisfy their taste buds. Sometimes these aliens come off as strangely sweet they have the best intentions to improve life for us human except no one wanted their help.

The book is really fun and all the chapters are short and snappy which creates a really fast paced novel. I can't wait to read more by her! What I really like about Renee Miller is that she's not just a really good writer, but she's also a really good storyteller which to me are two very separate things. I haven't seen many writers who have both talents. A great book! 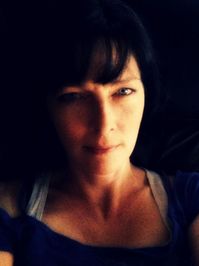 The Rust Maidens by Gwendolyn Kiste


The Rust Maidens by Gwendolyn Kiste is an amazing book and you're all in for a treat. I was very excited to have been given an ARC as this is an author who's work I've been avidly following. Initialy she was mostly a short story writer, gracing the pages of Black Static, Lamplight, Interzone, Shimmer, Nightmare and a whole load more. Since then she turned her hand to writing a critically acclaimed novella, Pretty Marys All in a Row which was released last year.

And 2018 heralds her first novel - The Rust Maidens. 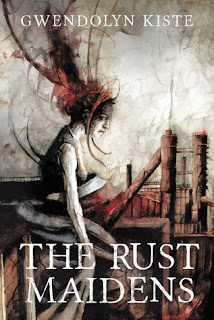 The Rust Maidens is set in Ohio during the 80's the title is a reference to what became known as the Rust Belt when industry rapidly declined leaving many families out of work. Rust Maidens follows the tale of the inhabitants of Denton street battling to survive the economic downturn. Things get a whole load worse for them, but it's not just the men who suffer but the women too, particularly the Rust Maidens made to suffer the actions of man.

Told mostly in flashback through Phoebe Shaw who returns reluctantly to her old home after 28 years to find her scars have not healed as well and she would have hoped. Ms Kiste has created a beautifully haunting landscape which also manages to be creepy and threatening at the same time. I too grew up in a small town and she has brilliantly captured the claustrophobic living conditions where the past and present taunt you every day.

Cleveland, Ohio is a town Phoebe is desperate to escape once she's graduated from High School, she plans to run into the sunset with her beloved cousin Jacqueline but her plans are scuppered when four local girls fall prey to a mysterious illness that no one can explain.

This is a coming of age story like no other, at first the girls are left to fend for themselves, even their nearest and dearest are unwilling to help them they would rather forget they ever existed. However Phoebe won't turn a blind eye and goes to battle like Joan of Arc.

I found Phoebe a really interesting character, the final girl who gets to tell her story in her own words.  What I like about Phoebe is that she possesses none of the usual final girl traits that allow them to survive. She's not a virginal innocent young girl, she does what she wants, never bites her tongue and not afraid to get into a fight. And she certainly doesn't allow herself to fall in love with the bad guy.

I really enjoyed this book. I could discuss it for hours but I don't like adding spoilers into my review and ruin the story for those of you who have yet to read it. Let's just say it's a book you can quite happily read over and over again.

It's a little off topic but this book reminds me of watching a history programme where a female historian was lamenting the fact that so many important women have vanished from history, and this book really reflects that. This is what Phoebe fights for, to have them remembered.

The Mouth of the Dark by Tim Waggoner

This has definitely got to be the most WTF book I have ever read? At the end of every page I was like "WTF?!" And it only got weirder further in. 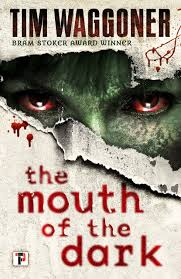 This is a really fun book and Tim Waggoner certainly has an amazing imagination which has earned him a Bram Stoker Award.

Jayce, a middle aged man stuck in a rut has lost his daughter. She's vanished into thin air and it's taken all these years following his bitter divorce to realise he barely knows anything about his beloved Emory. But one thing he is sure of is that he'll go to any lengths to find her.

But finding his daughter is no easy journey when he discovers a dangerous underworld, Shadow which  exists along ours. Jayce suspects this is where his daughter is, and that she might be in danger.

"He'll do anything it takes to find his daughter, even if it means becoming a monster himself..."

I wouldn't really classify this as horror though it is certainly dark. I loved how it was so unpredictable  which makes it a book hard to put down once you start reading it. This book can get quite uncomfortable at times, particularly when Jayce begins to learn more about Emory, it's literally every dad's worst nightmare but I love how Tim Waggoner is an author not afraid to embrace being controversial.

I was very fortunate to be given this book from Flame Tree Press which has just launched in exchange for an honest review. I have read quite a few titles, The Siren and the Specter, Bad Neighbour and many more I can't wait to get started on. I'd like to say how impressed I am with the craftsmanship of the writers involved. They're all amazing books and I can't wait to see what's released next. 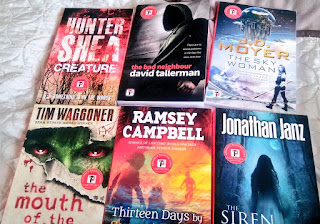 The Bad Neighbour by David Tallerman

I was really fortunate to have this book sent to me in exchange for a review from Flame Tree Press, but my other half liked the look of it so much he nabbed it for himself. 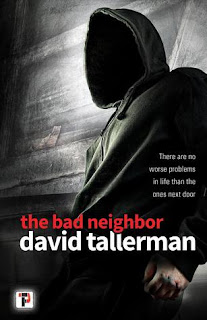 The back cover blurb gave me a good idea of what to expect but I was still shocked by how gripped by the story I became.

When part-time teacher Ollie Clay panic-buys a rundown house in the outskirts of Leeds, he soon recognizes his mistake. His new neighbor, Chas Walker, is an antisocial thug, and Ollie's suspicions raise links to a local hate group. With Ollie's life unravelling rapidly, he feels his choices dwindling: his situation is intolerable and only standing up to Chas can change it. But Ollie has his own history of violence, and increasingly, his own secrets to hide; and Chas may be more than the mindless yob he appears to be. As their conflict spills over into the wider world, Ollie will come to learn that there are worse problems in life than one bad neighbor.

What strikes me as so capturing is how much I could relate to the story's protagonist, Ollie. A lot of us have been there. Investing or wanting to invest a lot of time and emotion into your first house/flat purchase only to have your heart broken on discovering the property isn't all you thought it was when you learn your neighbour is as antisocial as they come.

Okay, that hasn't quite happened to me but the book makes it very easy to imagine yourself in Ollie's shoes. All your money invested in what a third party would only describe as shithole, which only dawns on you after the purchase when you have the displeasure of meeting the tyrant next door. All scarily relatable.

Of course things don't stop there. Without spoiling the twists and turns of the story, the neighbour is worse than merely an antisocial annoyance; his neo-nazi extremist views extend to actions also. Personally I found it really upsetting to reluctantly admit these types of people probably still exist in today's society. I would say if any potential readers are particularly sensitive to racism or have traumatic personal experience on that topic I could imagine this a tough read so proceed with caution in that case. Otherwise it certainly works to make you hate the antagonists and places you squarely behind Ollie and friends. It makes you wonder what you would do when confronted by such evil.

It really is a great read, I'd rate it very high as a real world gritty thriller. The kind of story that has me flying through the pages as my schedule will allow and thinking about the the story when I put it down. 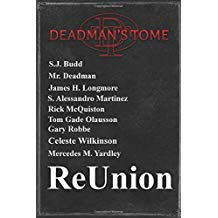 I'm thrilled to announce that my latest tale, From Beyond has been selected to appeared in Deadman's Tome ReUnion anthology this is a celebration of ten years of Deadman's Tome! This is on sale now!