A Secret History of Witches by Louisa Morgan

I was sold on this book by the title alone, long have I been utterly fascinated by witches and powerful women. I thought it would be a tale about kick ass witches but was surprised to find it something else entirely. 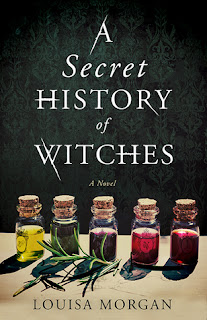 This is a family saga, told in five stories about the descendants of  powerful Romani witches descended from, Ursule Ochiere. a powerful sorceress. A Secret History of Witches is told in five book; Nanette, Ursule, Irene, Morwen and Veronica.

It starts in 1821 and leads right up to the modern age with the outbreak of World War 2. This type of story reminds me of Winston Graham's Poldark saga series and if you liked those you will definitely like this book.

I would say this book leans more to historical fiction that fantasy that shows five girls coming of age when they find themselves approaching adulthood and having to make big decisions about their fates, choosing what it they want and just how far they are willing to go to get it.

The tale starts off in Brittany 1821 where Romani travellers adept in the old ways of  witchcraft are desperately trying to evade the fervent witch hunters who pursue them across Europe. Ursule Ochiere takes them to safety using her powers and from there we follow the tale of the Ochiere line through Nanette, the grand-daughter of Ursule, who escaped with her family by crossing the seas and building a new life as farmers in Cornwall.

Each of the five main female characters in this story are very different, some I warmed to whilst others I did not. As they grow into women and then discover their powers of witchcraft it was interesting to see how each woman was motivated, some just wanted to survive, others to protect,  others to find love, whilst others wanted everything they could get their hands on.

This is not a high octane book fuelled with suspense and intrigue but it is a rather sweet tale about mother daughter relationships and of coming of age and being your own person. I did find this book to be slightly repetitive as each character's tale read a bit like the one before but it was an enjoyable read.But if you want to read this to find out more about witches you may be disappointed.

This article was first published by The British Fantasy Society