The Inn of the Seven Blessings by Matthew Hughes 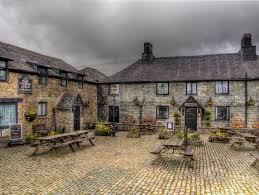 The Inn of the Seven Blessings by Matthew Hughes

Raffalon is a young thief down on his luck with dismal  prospects. Hiding out in the forest near the border of Vandaayoland he witnesses a savage band of Vandaayo warriors steal away with their intended human sacrifice. There he sees an opportunity and rummages through the victims scattered posessions that had been left behind. To his amazement he finds, amongst the usual rubbish, a small wooden box that he can sell on at the bazaar in Port Thayes, but it gets even better, it's a puzzle box and then on even further closer inspection it's a magic puzzle box. Raffalon is a clever thief and figures out how to open the magical box leading him on a mad escapade through the forest that borders with the notorious Vandaayoland; a land inhabited with savage beasts who fear nothing.

Along his way he meets with funny characters that through Mathew Hughes writing skills are quickly brought to life. This is a great tale which is refreshingly absent of stereotypical characters usually found in fantasy fiction. The plot is cleverly constructed and takes the reader on a real adventure. The Inn of the Seven Blessings is full of fun with no overused dull cliches. There are so many twists and turns in the narrative which keeps the reader enthralled, it's hard to see which way the story will go next. Also the story has some really interesting concepts and I'd love to see more fiction from the world in which this story is set in. Nothing is what as it seems in this witty tale which keeps the reader on their toes. It was sad to see it end.

The Inn of the Seven Blessings first appeared in the anthology Rogues which was edited by George.R.R.Martin and Gardner Dozois which features  tales from all many fantasy fiction giants such as Patrick Rothfuss,( The Kingkiller Chronicles - Name of  the Wind, The Wise Man's Fear) Scott Lynch (The Gentlemen Bastard Series - The Lies of Locke Lamorna, Red Seas Uner Red Skies, The Republic of Thieves,) Neil Gaiman, ( Sandman, Stardust, Neverwhere,) George R.R. Martin, (Game of Thrones series,) and Matthew Hughes work sits perfectly between them.

Matthew Hughes was born in England but has spent most of his life in Canada he has written many many novels such as Song of the Serpent, The Yellow Cabochon, Hespira, Template and Majestrum. He has also many short stories as well as crime fiction under the name of Matt Hughes.

You can find out more about him on his website http://www.matthewhughes.org/