As I mother I firmly beleive that children have just as much knowledge to teach adults as we have to impart to them.Children are magical creatures in themselves their views have not been manipulated and moulded by our society, logic and adults. Still they retain a sense of magic that sadly most adults lose as they grow.

There is more magic in the world than we realise and this charming and delightful story captures that perfectly. It recounts the tale of a little boy,Cyrus who has lost his parents at Bristol Renaissance Faire. For those who don't live in the U.S these are outdoor festivals where people come together to celebrate a time and way of life  long since passed in the mortal world, such as vikings, folklore, medieval etc. There he meets a beautiful young girl, Sprig Petalbotom, who is not as she seems. Is she a fairy or just a college kid dressed like one? 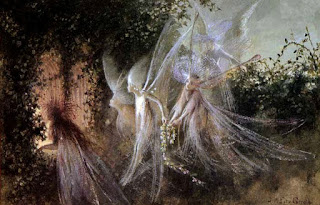 Sprig by Alex Bledsoe was first published in issue 42 of Apex Magazine which also features an interview with him about his work as an author.


ALEX BLEDSOE is an American author from Tennesse he has written many sucessful sword and sorcery and urban fantasy novels; Memphis Vampire series, Tales of Tufa series, Tales of the Firefly Witch series as well as many short stories and stand alone novels such as The Sword-Edged Blonde, Burn Me Deadly, Dark Jenny, Wake of the Bloody  Angel and He drank and Saw the Spider.

You can find out more about him here at his website