Mary Williams was Cornwall's leading ghost writers and during her career produced 17 volumes of amazing ghost stories most of which were set in Cornwall. Before she turned her hand to writing these ghostly tales she was a romance writer and had several novels published. What's clear in her writing is that she loved Cornwall where she lived from 1947 until her death in 2000 at the grand age of 97. It was reported that she carried on writing right up to her death.

What I really love about Mary Williams is that she has the ability to both amuse and disturb, her stories are not horrific or gore infested but light and creepy. She is able to plunge her readers into a totally immersive atmosphere that is both haunting and beautiful and shows you the ancient hidden depths of Cornwall which was once a savage and powerful land deeply associated with ancient Celtic folklore and legends. 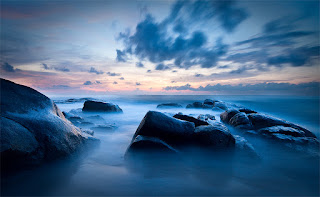 Sea Magic which was originally published in The Dark Land - A Book of Cornish Ghost Stories (Kimber Press 1975.) This particular tale is more quaint and amusing than chilling which showcases Mary William's talent for conveying humour in her stories whilst also keeping them dark and ghoulish.
This story centres around Mr Forsythe who returns home to his native Cornish village, Port Carn, to find it is much changed, he feels removed from the land he had once known and loved so well. However when he sets foot in the local inn and finds Joe Tregorse, an old familiar face, still working behind the bar who welcomes him back into the fold of village life.

Joe Tregorse gladly offers to put him up for the night usptairs in Miss Pretty's old room, "a fading spinster of indefinite age, with a certain talent for sketching and an arty way of dressing which gave her a humourous, slightly grotesque appearance."

Remembering this well known local character, he is sad to learn of her recent passing but intrigued when he finds out it was a most unusal deat that ended a most unusual life. Everyone has their own story worth telling and it was certainly true for Miss Pretty who was very much changed with the onslaught of a savage and wild storm which broke upon  the Cornish coast and changed her life forever.