Aphelion is a webzine that brings you the latest tales of science fiction and fantasy. It has been running since 1997 and now celebrates it's 20th year. Aphelion produces a monthly webzine that is packed with short stories, long fiction, poetry, features and flash fiction.

You can read all the issues including this one for free here! 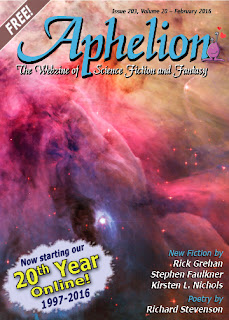 "It's just the way of things," Joe explained to me, whispering close to my ear. "When I came here for my 'nitiation 'bout five years ago, this place was crawlin' with guards and we had to be careful. Now that the place is closed and they're all gone, well... We just keep it up as a sort of remembrance to back then when it was really dangerous t'learn the secret.' "

At half-five they always come for Janie and because it's a Wednesday she heeds their call and follows. This great story is dark from the offset and foreboding with a conjured atmosphere of doom. Left all alone by her parents on a date night she leaves the family home seeking adventure.

But who are they? What is the initiation?

Initiation by Stephen Faulkner is a thrilling  tale that keeps you entralled right through to the end that keeps you feeling as nervous as poor Janie who's about to have her initiation. The story has a feel of childhood innocence shortly to be lost with the onset of adolesence. Janie is growing up making her own choices but are they wise options.

Stephen Faulkner is a former college administrator who now writes. He has previously been published in Aphelion with  Sex in the Afterlife and Playing God.

A Winning Combination by Roderick D.Turner

"Angela was the blonde in lane five. Calmly self-assured, eyes set on the lane in front of her, total focus on the event. That would be her."

Howard Vasquez has come to watch a swimming race - The Four Hundred Metre Mixed Individual Medley. He's come in particular to watch Angela Dysart, an amazing swimmer with apparent superhuman capabilities. She's still just a school girl who enjoys hanging out with her friends at the mall on weekends she doesn't want to be an international star she just loves to swim.

But how does she swim so well? Is she the ordinary girl she makes herself out to be?

A clever sci fi tale that is highly original and thought provoking that explores all the secrets locked in our genes.

Roderick D.Turner loves to write. In his own words - "I like writing stories, and get really fired up when I enjoy what I have written. That's the best part of writing - you are, after all, most often your only audience. What's really inspiring is when you start writing about a character and they take over, almost literally writing the story themselves"

He has been published before in Aphelion with Synchronicity, Insider's Report, Breach, Seepage, Parasitic, The More Things Stay the Same, Court Dresser, Causal Effect, Drift, The Devil You Say and many many more!

The Elite by Noel Carroll

"The giant star Betelgeuse explodes into supernova, its close proximity to Earth making it both an attraction and a source of apprehension. Not to worry, the scientists say, but are they correct?"


Gilbert Carter had everything in life, the perfect soulmate and great prospects after leaving university with a degree in aeronautical engineering. But then the giant star Betelgeuse exploded into supernova...

"Looking back, I count that as the moment when we both awakened to the possibility that our future might not be entirely ours to decide"

However this strange celestial star is not acting as it should and even the scientists don't know what's going on, but the look on their faces says it all. Gilbert is determined to save himself and his beautiful girlfriend Nicole and receives an offer too good to turn down. But there's a catch will he sacrifice everything he holds dear for survival? Does he deserve to live? A great sci fi tale that also  serves as a chilling warning to us all!

Noel Carroll are a husband and wife team who have published many short stories and novels. They have appeared before in Aphelion with Aliens Need Not Apply, By Invitation Only and  Beyond Sapiens,


The Corner Lot by Shawn D.Brink

"He walked along the large corner lot that existed about a block from his home. He had heard that this was haunted land."

Amos, a little boy of seven has inadvertantly come face to face with the school bullies, the Sullivan brothers, that he lives in fear of . They quickly have him surrounded before he has a chance to get away. One of the brother snatches something most dear to Amos and throws it into the garden of an abandoned house that is supposedly haunted.

Is Amos brave enough to go and get it? Is the house as haunted and dangerous as it looks?

The Corner Lot by Shawn D.Brink is a very original and creepy tale that really has you rooting for Amos the hero of the tale.

Shawn D.Brink is the author of The Space Between and The Devil's Revenge out now from Martin Sisters Publishing. He has written many short stories and has appeared in many publications such as Specklit, Flashes in the Dark, Theme of Absence as well as Aphelion.

You can find out more about him at his website  www.shawnbrinkauthor.wordpress.com

The Tale of the Sea Upon the Thief's Path by S.J.Budd

"Some say they're the bells of the sea marshals closing in."
"Some say it's the voices of the dead stuck on Torr Island."
"Whatever they are," The landlord concluded, "They never bloody shut up!"

Jack is a smuggler who roams across the rough seas of Gunaylia. He'll say anything to get his way and spares no thought for consequence. One night he is drawn back to the savage and lawless fishing town of Torrpoint  made famous for the legend of the phantom bells.

Why do those bells ring? No one knows...

I write stories for fun and so far my short tales have appeared in Sanitarium Magazine, Siren's Call Publications, InnerSins, Bewildering Stories and of course Aphelion!

You can find out more about me here - www.sjbudd.com

The Lost City of the Neanderthals by Julio Toro San Martin

An epic fantasy tale set in an alternate universe. Giglamesh  the great King who is also part god is bored and looking for excitement in his life. His friend Enkidu tells him of the lost city of the Neanderthals and the legend associated with it.

" "There, it is whispered, he found terrible tablets fashioned by gods ancient and unknown. It is said just reading the tablets drove him mad. He grew darker in countenance, learned blasphemous secrets and magic, while becoming long-lived."

Giglamesh and Enkidu set off for adventure seeking the lost city of the Neaderthals. Giglamesh is hell bent on learning the secrets locked in the Zagros mountains. Will they foind what they are looking for? Will anyone or anything stand in their way?

Julio Toro San Martin is a Canadian writer he has written numerous short stories that have appeared in Innsmouth Free Press, The Lovecraft Ezine, NonBinary Review and many others.