The Hundred Thousand Kingdoms - by N.K.Jemisin

I've heard loads of great stuff about this new and upcoming author N.K.Jemisin, and it's a refreshing change to see a fantasy novel that is multi cultural. The main character, Yeine Darr, is mixed race which is not something you see much of in the fantasy genre, and I also like to read novels centred around a strong female character.

I decided to give this book a read as I love being absorbed into different worlds and this book looked highly original and inventive. The book has a really modern feel, the author has been really clever in mixing modern day issues into a fantasy novel. 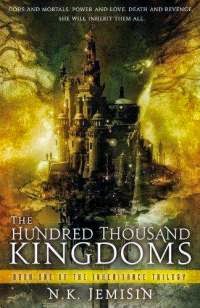 The story is very original, it's very intelligent writing, sometimes I felt the novel in places was at risk of appearing far fetched and unrealistic with the gods being so real and approachable to mortal beings, it's a very difficult concept to add in a book. However N.K.Jemisin does it very well and the characters do seem plausible.

I'd recommend this book, it's refreshing to read great fantasy and alternative novels from a female perspective. This is a great debut and if you love the book you'll be happy to know that The Hundred Thousand Kingdoms is just the first instalment of a trilogy, and its sequel - The Broken Kingdoms is already out.
Posted by S.J.Budd at 20:31