A Press of Feathers by T.C.Parker 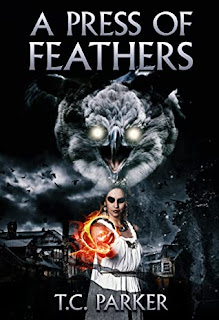 Bea has it - more than ever, since her husband left her.

Lou has it - has it in spades, since she lost her job and her flat and had to move back in with her parents.

And whoever’s been murdering and mutilating the men whose bodies keep mounting up in Bea and Lou’s city - they’ve got it, too.

But when Bea moves to The Gates, an exclusive new estate with a strange and troubled history, and Lou’s interest in the murders leads her right to Bea’s door, the two women find the lines between nightmare and reality, history and myth and sanity and madness blurring around them - and a primeval entity born from the chaos of creation with her own appetite for rage rising up to meet them from the ground below.

She sees them. And she’s hungry.

A Press of Feathers was a joy to read. Think murder mystery complete with a determined sleuth battling not just a serial killer but also evil crows, ancient deities and rich people!

Told through the tale of two women Bea and Lou who have both recently moved to Leicester to rebuild their lives. Bea isn't going to let heartbreak and divorce stop her and is determined to carry on with her life. She moves into a new housing development called The Gates, it's a strange place but she can't afford to live anywhere else. The rent is unusually low, there must be a catch somewhere...

Meanwhile Lou has been forced to move back from London after losing her job. Employment opportunities are sparse but when she hears about all the recent killings she has an idea....

Using her detective skills Lou finds a overlooked connection between the killings which soon leads her to The Gates.

Eventually Lou and Bea cross paths, from this killer no one is safe. Can they find out what is happening before it is too late?

I had so much fun reading this book, it works really well as a murder mystery but with the addition of supernatural elements and ancient folklore it really takes off. When the book switches between the two characters you are eager to find out what the other one is up to.

What makes this book so enjoyable other than the suspenseful atmosphere and intrigue are the characters, Lou and Bea. They are so likeable and relatable. Both have been through tough times but instead of wallowing in their own misery they just get on with things and emerge all the more stronger for it.