I'm so thrilled to be starting 2020 with a brand new batch of horror stories. Crowded House and other stories will be released 31st January from Demain publishing. 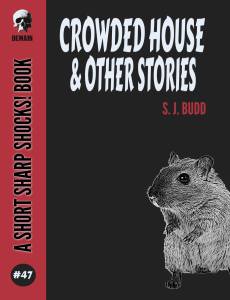 Containing the stories: UNTIL I GO – Selina longs to be free from her mother’s hatred. They haven’t spoken in years until Selina is asked to visit her dying mother in hospital one final time. This is it. Soon Selina will be free but will their last goodbye go smoothly? CROWDED HOUSE – A young woman finds out she is the sole heir of her Uncle’s estate after he vanishes. She comes to Canterbury for a new life but the house is not what she was hoping for. It has been left in a terrible state and holds many secrets she must confront if she is to take control of it before it takes control of her. A BUBBLE OF FRIENDSHIP WILL KEEP US – On the cusp of adolescence, Ella fears for her best friend Jade who is turning her back on their childhood friendship and the mysterious forest beyond their homes. Jade wants to grow up but the fairies want Ella to put a stop to it.”

Crowded House will be released along with some other great works; The Birthday Girl and Other Stories by Christopher Beck, Dark Corners by David Charlesworth and Moonlight, Gun Shot, Mallet, Flame by Alicia Hilton.

These great tales are only 99p each. I can't decide which one I want to read first so I guess I'll just buy them all!

So far there have been 50 epic tales in the series such as An Invitation to Darkness by Hailey Piper, Cinders of a Blind Man who Could See by Kev Harrison, The Forest is Hungry by Christopher Stanley and The Town that Feared Dusk by Calvin Demmer  plus many many more you need to check out.

Writing about the stories contained in his Short Sharp Shocks! entry, author Christopher Beck said: “MISSING CHILD is based upon my life. I was once married and my ex-wife had a little girl with whom I developed a great relationship. After the marriage failed, things between the ex and I were sour which left my relationship with her daughter uncertain. MISSING CHILD was written as an attempt to deal with that uncertainty. Though it was tough at the time, I’m happy to say that now, years later, I have a wonderful relationship with the kiddo. [I would say of my second story] THE BIRTHDAY GIRL, you know sometimes in life terrible things happen and sometimes there aren’t happy endings. Stories like this aren’t easy to tell but that doesn’t mean they shouldn’t be told. [My final story in this mini-collection is] THE TRASH CAN. In my opinion, the great thing about short stories is that they don’t have to explain everything, they can just be pulpy fun. I used to live with my brother and he had a dog that raided the trash constantly. He bought a trash can which was basically dog proof. Soon after our roommate threw a paper towel into it and the lid slammed down way too hard and I had an instant story!”

Hand to Mouth by Deborah Sheldon,

“When the truth doesn’t satisfy, people make up stories.” An imprisoned man writes letters to his son, trying to explain the bizarre circumstances that led to his incarceration. But can his son believe him? Award-winning author Deborah Sheldon keeps you guessing with this novelette of secrets, lies, conspiracies and paranoia.


Moonlight,Gunshot,Mallet by Flame by Alicia Hilton

Writing about her Short Sharp Shocks! author Alicia Hilton said: “These are stories about dangerous women who confront supernatural forces. When the moon is full passion simmers and demons strike. Who will survive? ” Of MOONLIGHT, GUNSHOT, MALLET, FLAME, Alicia summed up her tale, thus: “Laura is a hitwoman who murdered men to avenge and protect innocent victims, but her violent past catches up to her after she kills her nephew.  Are Laura’s terrifying visions hallucinations, or real? “ And of her second story, A LITTLE DEATH: “An Internet date unites two monsters. Descended from flesh-eating witches, Darla must choose whether to embrace her magical powers and kill, or risk her own destruction for love.”

Horror can take a lot of shapes and sizes. For some, it appears in the form of Patrick as he steps out from the shadows, Stanley blade in hand. For Patrick, however, the only thing he fears is not shooting up. So he finds himself scouring the darkest corners of the world for his next hit. Exploring those lost and desolate places that no man should disturb.
Posted by S.J.Budd at 01:41