The Haunting of Henderson Close by Catherine Cavendish 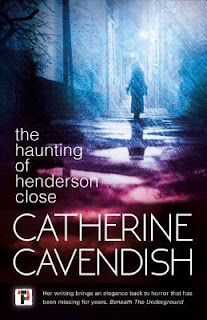 Ghosts have always walked there. Now they’re not alone…In the depths of Edinburgh, an evil presence is released.Hannah and her colleagues are tour guides who lead their visitors along the spooky, derelict Henderson Close, thrilling them with tales of spectres and murder. For Hannah it is her dream job, but not for long. Who is the mysterious figure that disappears around a corner? What is happening in the old print shop? And who is the little girl with no face?The legends of Henderson Close are becoming all too real. The Auld De’il is out – and even the spirits are afraid.

I had a great time reading this tale. I loved the setting which is based on St Mary King's Close in Edinburgh. Hidden underneath the Royal Mile it is a warren of narrow streets where the city's poorest worked, lived and died.

Hannah has just moved to Edinburgh after a painful divorce and seeing her only child move to Australia. After being made redundant from her successful but finished career as a drama teacher she rents a flat and takes a job as a tour guide for Henderson Close.

Henderson Close is a tourist attraction famed for its spooky residents and macabre history such as the murder of a local woman, Miss Carmichael, which was never solved.

At first Hannah settles in well, finds new friends and starts to enjoy her life until....

She soon feels like she is being watched looking out from her flat window she sees a strange shadow. Strange incidents begin to happen at work after the builders turn up for renovation work culminating in her friend, Mairead completely disappearing whilst going in to Henderson Close alone.

Hannah thinks its a ghost responsible for all the drama but in reality its something much worse...

This was a really fun read, I do love a spooky ghost tale. The setting was brilliant and Catherine Cavendish had an amazing with with writing the Scottish dialect. I once lived just outside Edinburgh and it is spot on. The pacing of the tale is fast paced and the atmosphere is fully immersive. I now want to go to Edinburgh just to visit St Mary King's Close.

The Haunting of Henderson Close by Catherine Cavendish was released by Flame Tree who are a fairly new horror publishers. To date I have read quite a few of these titles and have loved them all. I was sent a few to review but since them I have been buying them as although their titles are really diverse the quality of horror is really high. You know you'll be getting a great tale from them.