Cinders of a Blind Man Who Could See by Kevin Harrison


Kev Harrison first appeared of my radar when I read his brilliant story, The Waiting Game, featured in Aphotic Realm's latest issue - Fangs. A man visits his girlfriend's place of work with disastrous results!

So when I saw that another of his stories, Cinders of a Blind Man Who Could See, was being released by Demain Publishing I jumped right in. 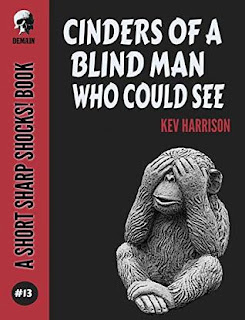 Cinders of A Blind Man Who Could See is an excellent serving of folk horror, a sub-genre I've been obsessed with ever since I saw The Wicker Man late one night on the telly.

Like with The Wicker Man, this tale has a great atmospheric build up. The story is really unsettling, no one is who they seem and there are many secrets in one little town who don't approve of outsiders. It's set in a small community in Northern England where Owen lives almost as a recluse after a terrible accident from which he's never truly recovered.

He's woken late one night, to witness a miracle, his son's sight has returned after 21 years. Everyone in the community is delighted but Owen has no faith. He senses danger underfoot.

David his son, says his eyesight was returned to him when he encountered strange markings on a majestic Yew tree dating back 1500 years residing deep in Leonard Woods. He is overjoyed to have his vision restored but yet it is not enough to convince him that the ancient woods should be saved from a development project bulldozing the woods.

I really liked the character of Owen, a man of few words outwardly he appears cold and tough, but he knows what is right and wrong, good and evil, and will go to any lengths to protect the ones he loves.

Cinders of a Blind Man Who Could See is a great British horror story. Sometimes its best to leave the old pagan ways alone lest you find yourself at war with ancient powers you can't begin to comprehend.