House of Skin by Jonathan Janz 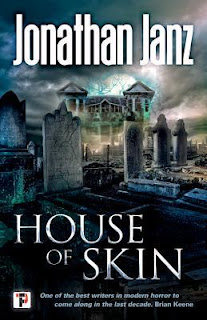 Myles Carver is dead. But his estate, Watermere, lives on, waiting for a new Carver to move in. Myles's wife, Annabel, is dead too, but she is also waiting, lying in her grave in the woods. For nearly half a century she was responsible for a nightmarish reign of terror, and she's not prepared to stop now. She is hungry to live again...and her unsuspecting nephew, Paul, will be the key. Julia Merrow has a secret almost as dark as Watermere's. But when she and Paul fall in love they think their problems might be over. How can they know what Fate--and Annabel--have in store for them? Who could imagine that what was once a moldering corpse in a forest grave is growing stronger every day, eager to take her rightful place amongst the horrors of Watermere? FLAME TREE PRESS is the new fiction imprint of Flame Tree Publishing. Launched in 2018 the list brings together brilliant new authors and the more established; the award winners, and exciting, original voices.


I imagine most of you horror fans have already heard of this guy, for me he appears to have popped out of nowhere becoming an overnight sensation. He's quickly becoming one of my favourite authors. I've read a few of his books now from Flame Tree Publishing, who are reprinting all his previous novels, and with each read I like him more and more.

House of Skin shares a lot of similarities with his previous book I've recently read ,The Siren and the Specter. The books both feature a remote haunted house, a main character who is trying to escape his past and a young beautiful girl full of secrets. Jonathan has come across a great formula and it works each time without the plots feeling similar.

In House if Skin there are two story lines. We have Paul who is a bit of a loser, he's reached his mid thirties and has done nothing with his life, other than amass a beer gut and angry unsatisfied girlfriend.  His life is about to change in a big way when he inherits a huge sprawling mansion, Watermere from his Uncle Myles. A relative he's never met as his family hate him and refuse to ever talk about him.

Amazed at his luck, he quits his dead end job, his flat and his nagging girlfriend and leaves for Watermere in the dead of night thinking that when he wakes up after a long car journey he'll land into a much happier life.  He's wrong of course, this is a horror tale, literally the whole town hates him and he doesn't know why.

We also follow the stories of Myles Carver during the 1950's, Paul's recently deceased Uncle. Myles is desperately in love with the beautiful and mysterious Annabel who unfortunately happens to be his brother's wife. Myles and his brother David both live in Watermere and its status in the small town is legendary.  The brothers lead a wild life of privilege, excess and throw debauched parties laced with liquor and sex.

One of the things I really like about Janz's writing is his ability in creating these very believable characters and then change them seamlessly throughout the course of the book. The ending is brilliant and really satisfying, can't say much about it without giving spoilers but every loose end is very neatly tied up. I'd love to see a sequel to this.