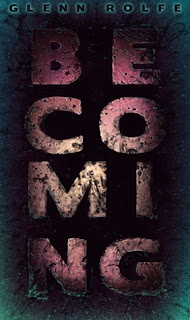 Something ancient has wormed its way up from the earth....A change has come today.After Michele Cote's best friend disappears, no one believes her story about the thing responsible for his abduction. Forced to figure out the mystery for herself, Michele encounters terror she has never known, and witnesses the impossible.When other members of the community begin to change or vanish, Sheriff Shane Davis must look beyond reason in order to stop the evil seeping into this small town. With help from an unlikely source, Sheriff Davis will come face-to-face with the truth.You can't destroy what you don't understand. For the town of Avalon, Maine, the future is about change...for better or worse.

Becoming is horror adventure unlike any other. There's gore, blood, evil monsters supernatural and human but there's also lots of fun. I really enjoying reading this tale, the action starts straight away and its a book that doesn't take itself too seriously, it just wants to entertain.

Trouble starts in the small town of Avalon when a young person goes missing. His best friends knows what what happened but people aren't prepared to believe her tale that a creature took him. Soon more and more start to disappear even weirder are the ones who are changing all under the spell of the lady in the lake.

Its up to a small band of townsfolk to save themselves and their town from total annihilation.
What makes this book enjoyable is that there are a whole host of characters to get behind. My favourites were Michele and her dad, the sheriff and his wife.

My only slight fustration with this tale was that there were a lot of characters. I really struggled to remember who everyone was, but it didn't get in the way of enjoying the book, which is a total bloodbath!