Tales From the Realm: Volume One


Launched just over a year ago, Aphotic Realm, the home of strange and sinister fiction, has been going from strength to strength and have now celebrated their first year by releasing, Tales From the Realm: Volume One. Available now in paperback and kindle it features twenty of the best tales to have featured on their site. 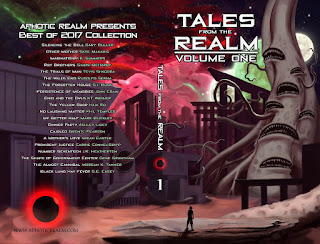 Silencing the Bell by Gary Buller

In this haunting tale, Harry Stubaker is a desperate man chained to his wicked past. to make things right trying trying to hide his dark deed hoping it will be forgotten but sometimes the past won't die.

Other Mother by Skye Makaris

For those who love fairy-tales you'll love this brilliant blend of your favourite tales, a very strange and beautiful story on what it means to be a woman.

Emma just wants someone to her listen to her and the problems she's going through, but there's no one but her strange friends who want to know and soon she finds herself isolated. Ever get that feeling you're the only rational person in a world gone mad.

Don't go down to the creek today. But will Chad and Steven ever listen to their parents? I loved the ending to this slice of Australian horror!

The Trials of Man by Tevis Shkodra

Like Other Mother by Skye Makaris, this too has a leaning towards fairy tales where it focuses on man and mankind. Can we ever be free form our savage natures once they are awakened? A young Prince has been set a trial by his father which he must pass in order to rule.

The Wall's End by Ruldolfo Serna

Mesah and Salem are fighting for survival in a world grown savage but the past comes back to get them. A scary dystopian tale about the future of our race.

The Forgotten House by S.J.Budd

Kirsten just wants to make a house into a home, but someone else also has their eye on it!

Persistence of Memories by John Crain

Miyoko and Winston are on the hunt for a planet that can sustain human life and finally think they have found it, the future of mankind is saved. Oh wait...

Enid and the Owls by KT Wagner

A really cool and strange tale about a lady called Enid who lives to serve others whilst completely ignoring her own needs.

The Yellow Door by Isha Ro

A really creepy and original tale of a strange and enticing new arrival in a well to do street. It's not in style with what the neighbours want their nice little street to look like and soon they find themselves drawn to the garish yellow door...

No Laughing Matter by Phil Temples

A dark yet funny tale about the strange going ons in Forest Mills. It's definitely no laughing matter!

My Better Half by Mark Blickley

A twisted story about a young man's quest for girls. After a disastrous relationship turns sour he stumbles upon the ultimate plan.

A really cool tale about a kick-ass mum set in a turbulent future that leaves you very scared about the future!

A really sinister tale about chance encounters and bad break-ups. Is there nowhere where a girl can feel safe?

A Mother's Love by Micah Castle

A really awesome tale about the sacred feminine nature and the folly of men.

I was really creeped out by this tale, it reminds me of how easily we are all subjected to being brainwashed.

This tale really struck a chord with me and has so much relevance with what's going on today  in politics on both sides of the Atlantic.

The Shape of Goverment Centre by Gene Grantham

A great story that starts off being hilarious but soon takes a very downward turn when college friends go on a drink fuelled escapade.

The Almost Cannibal by Morgan K.Tanner

Possibly the darkest tale in this collection! Don't read before going to bed.

A dark foreboding tale about the strange going ons in a small American town. You'll never look at Wurzel Gummidge in the same way again.