Unclean Spirits is an urban fantasy unlike any I have read before. Our main character is Cason Cole, a lovable rogue who has been serving E as a bodyguard for the last five years. His employment is suddenly terminated when a mysterious guy appears and blows up his boss into tiny little pieces. 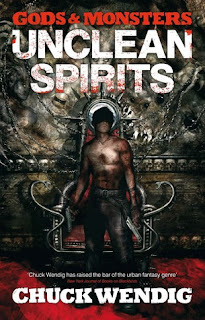 Is Cason upset, angry or scared? No, he makes a bid for freedom getting into the first taxi he can find and makes a trip back to his beloved wife and son whom he hasn't seen in five years.

All hopes of an ecstatic family re-union are dashed when both his wife and son try to kill him when he turns up unannounced at their house.

As I said this is unlike anything I've read before. I'm going to tentatively call it American lad horror, if that even is a thing? The book starts off quite confusing but fret not it all clicks into place very quickly. I took a while to get into it, I found it really confusing but I persevered and after the first chapter, I was in!

Chuck Wendig has a very distinctive style of writing, it’s very economical, straight to the point and really packs a punch. There's no flowery descriptions in here just full throttle action which moves at a really fast pace

Cason Cole only wants his family back but is forced to find the culprit for killing his boss. He thinks that's all he has to do to sort out his crazy situation but it just takes him further into a dark web of unearthly trouble when he realises he is more than just an inconsequential pawn in a very big power game between the gods who have been evicted and cast down to live in the gutter with us mortals.

The pace is very fast and the various sub plots weave together in a way that builds up to a powerful ending. When writing about gods living amongst us it can all so easily sound very far-fetched but in Unclean Spirits it makes for a really interesting tale.

It’s a fun novel that doesn't take itself too seriously, with this tale you're getting all story all action. 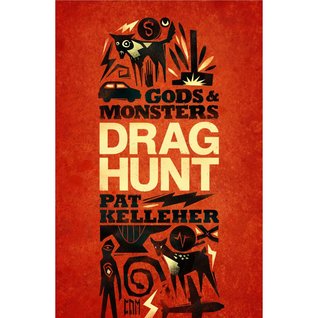 Accompanying this tale is a bonus story by Pat Kelleher titled Drag Hunt. It’s set in the same world as Unclean Spirits and features some of the same characters. I really loved this darkly funny and delightful tale.

In Drag Hunt, Kai AKA Coyote has his penis stolen and he will stop at nothing to get it back. Joining him in his quest is Richard Green a young man whose life is spiralling into constant misfortune after losing his job, his home and his girlfriend in one hit.

In the same vein as Unclean Spirits there are lots of gods trying to claw their way back to heaven. I loved the selection of Anglo-Saxon deities featured in Drag Hunt which is set mostly in the U.K.

Pat Kelleher does a great job of continuing Chuck Wendig’s epic Unclean Spirits. The tales really complement each other. Pat Kelleher really captures the essence of Coyote and turns him into a great character worthy of their own tale. Unlike Unclean Spirits this isn’t what I would call horror but it is very funny and I had quite a few laugh out loud moments whilst reading this. Richard Green is desperate to turn his life around whilst all Coyote wants is his penis back! 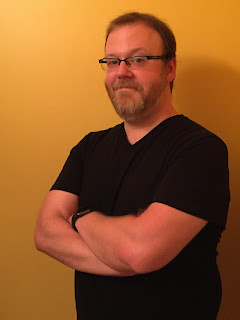 Chuck Wendig is a novelist, a screenwriter, and a freelance penmonkey.
He has contributed over two million words to the roleplaying game industry, and was the developer of the popular Hunter: The Vigil game line (White Wolf Game Studios / CCP).
He, along with writing partner Lance Weiler, is a fellow of the Sundance Film Festival Screenwriter's Lab (2010). Their short film, Pandemic, will show at the Sundance Film Festival 2011, and their feature film HiM is in development with producer Ted Hope.
Chuck's novel Double Dead will be out in November, 2011.
He's written too much. He should probably stop. Give him a wide berth, as he might be drunk and untrustworthy. He currently lives in the wilds of Pennsyltucky with a wonderful wife and two very stupid dogs. He is represented by Stacia Decker of the Donald Maass Literary Agency.
You can find him at his website, terribleminds.com 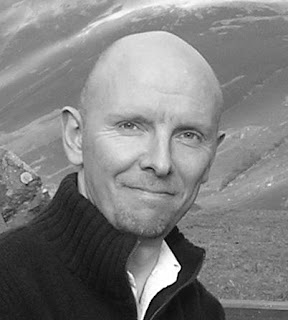 Pat Kelleher is a freelance writer. He has written for magazines, animation and radio. He served his time writing for a wide variety of TV licensed characters, translating them into audio books, novels and comics. Yes, he¹s written for that. And that. And even, you know, them. He has several non-fiction books to his credit and his educational strips and stories for the RSPB currently form the mainstays of their Youth publications. Somehow he has steadfastly managed to avoid all those careers and part-time jobs that look so good on a dust jacket.
(From publisher's website http://www.abaddonbooks.com)