Dreaming At the Top of my Lungs by Israel Finn

This is a book I've been meaning to read for a while and I'm really glad I finally got round to it. Seriously my TBR pile is getting huge, there's just so many great books out there. 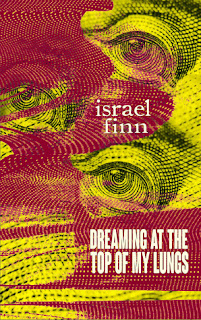 This is a great collection. Israel Finn has a really cool sort of laid back writing style that has an informal feel to it like he's right beside you talking to you reeling you in unawares.  Dreaming At the Top of My Lungs covers a great range of subject matter and themes and no two stories are the same.

I'm not quite sure what genre this falls into, its not horror but definitely dark and has some elements of science fiction, weird and speculative fiction. Which is cool as I like stories that don't really fit in with the crowds.

These are tales about the down and outs, the forgotten people who fall through the cracks and feel they will never be able to haul themselves back up. These are the people who feel they've lost everything already. As I read this I get the impression that Israel Finn has somehow lived a multitude of different lifetimes and is sharing his dark wisdom with us. He's clearly seen a lot in life as these stories hint at.

Its a quite a short collection of  12 short stories and took me no time at all to read as they're all so good. As I'm writing I'm finding it really hard to pick out a favourite tale. There really wasn't any that I thought that weren't as good as the others. They're all so different and brilliant in their own ways.

I found the penultimate tale, Ugly really moving and I just loved the dark imagination of it, a modern day Jesus.  As was Water and War  and Stones which really makes you think about the world we live in and what the future might hold.

I really enjoyed Sick Day and No Such Things as Monsters as very darkly  amusing and gruesome tales which will appeal to those who like a bit of gore. Stranded was a really fun read with a great ending. The Present was a really satisfying read and I also felt the darkest tale.

The clever thing about Israel Finn is that he somehow makes you side with his characters who aren't always the nicest of people, somehow you feel like you played a  part in their crimes and are complicit in what is it they're doing.

I'm really looking forward to reading more by Israel Finn,  definitely going to keep an eye for him in the future. 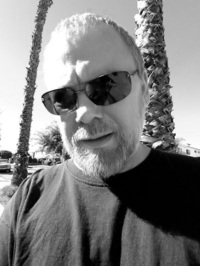 Israel Finn is the author of Dreaming At the Top of My Lungs, and a winner of the 80th Annual Writer’s Digest Short Story Competition.He is a horror, dark fantasy, and speculative fiction writer who's had a life-long love affair with books, weaned on the likes of Kurt Vonnegut, Ray Bradbury, and Richard Matheson, and later discovering Robert McCammon, Dean Koontz, F. Paul Wilson, Dan Simmons, Ramsey Campbell, and Stephen King, as well as several others.Israel lives in southern California with his wife, Eyde, and his dog, Sammy.He's currently working on his new novel, Darkworld.