Are You Ready for the 2016 Ray Bradbury Writing Challenge?


Ray Bradbury was a hugely popular science fiction author best known for his novel Fahrenheit 451 and it is one of his many inspiring writing tips that will be heavily influencing me for 2016.

Wise words indeed and as 2015 draws to  a close it's time to set out some new targets for my literary pursuits. I've found that setting myself targets is a great way to stay focused at motivated.

I've been very fortunate to have had a few short stories published in 2015 in the wonderful Sanitarium Magazine, Siren's Call Publications, Deadman's Tome, Innersins and Bewildering Stories and I hope it will continue into 2016.

However as a beginning writer there is HUGE scope for improvement in my stories and so my challenge for 2016 is to write at least one short story per week every week. Even as I write this I highly doubt whether I'll be able to acheive this but even if I only write 20 tales, that's still 20 tales!

I think that to be a sucessful writer you need so much more than the ability to write well.
You also need to be able to back up your creative talents with brute force in the forms of ruthlessness discipline and a lot of determination. 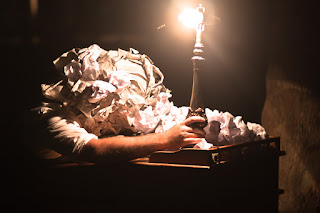 S.J.Budd is a writer of all things weird and creepy. Previously her tales have been featured on Deandman's Tome,  Sanitarium Magazine, Dark Gothic Resurrected, Liquid Imagination, Aphotic Realm, Aurora Wolf, Aphelion, Blood Moon Rising Magazine, The Wild Hunt, Danse Macabre, Shadows at the Door, Inner Sins, Bewildering Stories, Siren's Call and many more.
She lives at www.sjbudd.co.uk  and  @sjbuddj
Spells and Persuasions, her debut collection of short stories of horror and dark fantasy is available now in paperback and kindle from Amazon
Posted by S.J.Budd at 14:54