How to Write for Fun

I've recently finished a second draft of a novel I have been writing for the last two years and although it was an incredible feeling to get that far, it has left me really drained. I feel like I need a six month break from writing but am fearful my writing may suffer. I also worry whether this is the beginning of a serious bout of the dreaded writer's block.

It's taken a year of hard graft to complete the second draft and towards the end working on it day after day it was beginning to feel like a chore which for me is a massive warning sign that something is going wrong in my novel. Recently, I read a great tip on writing which warned that if you're not having fun writing it, no one is going to have fun reading it.

Then I came across this great little article on Buzzfeed written by Hayley Campbell, about the writing style of Neil Gaiman. He talks about how he writes all his novels by hand. For example his novel Stardust was set in the past and he bought a fountain pen and leather journal to see if it would affect his writing.

The results were great, (quote from said Buzzfeed article)

“And it did, it really did. I was sparser, I would think my way through a sentence further, I would write less, in a good way. And when I typed it up, it became a very real second draft – things would vanish or change. I discovered that I enjoyed messing about with fountain pens, I even liked the scritchy noise the pen nib made on the paper."


Instantly I thought this was a brilliant idea of taking your writing back to basics. It was how I used to write when I was a child, when I first discovered my love of making up stories in my head and transferring them to paper. So I'd thought I'd give it a try. Being incredibly left handed I decided that a fountain pen would be too smudgey so I went for a biro and notepad. 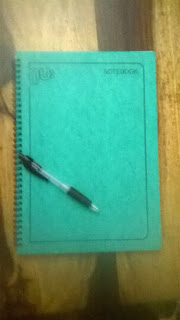 I had an idea for a story that I wanted to explore. I had no idea whether it would take the form of a short story or novel. I just wanted to play with it. I wanted it to be a fun project where I could just have fun and not worry whether it was any good whilst I recuperated from my novel writing marathon.

Because I wanted it to be fun I didn't sit down and spend hours meticulously planning my story before I started to write. My aim was just to sit back and see where the characters took me, let them do the hard work for a change. I simply had a vague ending in mind and just began to write...

I'm an avid reader. I always have to have a least one book on the go. I love reading for I love going on adventures in other people's imaginations. But now I wanted to go on an adventure in my own, through my own writing.

I also set myself an easy task of writing for just one hour a day and through using a notepad it's incredibly easy to sneak in ten minutes here and there no matter how busy you are. Within  a few days of starting I had loads of pages completed. For the sheer fun of it I began to draw pictures to accompany my story. 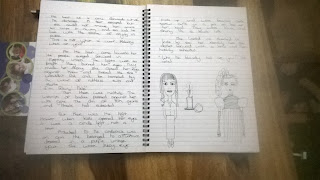 And something amazing has happened. My imagination has sparked, it feels as potent as a child's. But most importantly it's just so much fun I find myself even waking up at night itching to do some writing.

Even just the simple act of drawing a few pictures really helps with plot advancement and descriptions. It's like rediscovering where my love and reading and writing began as a child where I would write stories and draw picture to accompany them.

I honestly have no idea of where this story is going or whether it will be any good but writing it is just so much fun and I'm finally on an adventure of my own.