The Name of the Star by Maureen Johnson


The Name of the Star is the first book in a trilogy of books called Shades of London and is written by Maureen Johnson who so far has written ten highly successful novels.

This is a book intended for young adults but it has a much wider appeal. The story centres around Aurora Deveaux, call me Rory, a US teen coming to study in London whilst her parents, two law professors from Benouville , Louisiana, have come over to lecture at Bristol University. 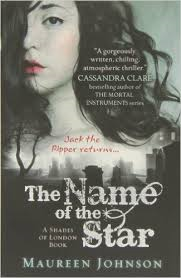 I think the reason why I like this book so much is that I just love Rory. She's not a delicate girl who's insecure about how she looks, or how many friends she's making and whether she's just met the boy of her dreams. This girl is very refreshing, she's smart, down to earth, sure of herself and she's really funny. She's the sort of character any girl can relate to.

When you start to read this book which is told by Rory in first person, you feel like you have been accepted by her as a close friend and taken into her confidence. This tale starts off like any normal tale. Rory has enrolled to study at Wrexford School in the east end of London and we see her as she settles in and tries to make sense of the English way of life.

Except Rory soon finds she is experience too much of the British culture when one of it's more infamous characters makes a return. As soon as Rory arrives, "some nutter's gone and pulled a Jack the Ripper."

But Rory takes this all in her stride as she is one cool cucumber, even when she becomes a witness in a murder investigation with no leads. It seems Jack the Ripper has returned from hell to take more victims in identical killings. From this point the pace of the story really kicks off and it's a thoroughly riveting read blended with supernatural elements.

In some places this book is very chilling, refreshingly Maureen Johnson does not shy away from gore but it wonderfully contrasts with Rory's hilarious and witty observations. I particularly like the scene where Rory and Jerome choose a certain object to study whilst visiting the National Gallery on a school trip.

Another aspect I really like about this book is that although there is a love interest for Rory it's not of central importance to the plot. There's quite a few quirky and interesting characters and subplots that all fit together perfectly. The cliff hanger will leave you wanting more.

I think why I really like this book is that it's written really well and completely engrossing. It blends perfectly modern London with Victorian London. The past is really brought to life and highlights London's  rich historical background. This isn't just a book for teens and deserves to be read by everyone.