I'm a big fan of Sanitarium Magazine, I had my short story, The Little Orphan Girl, published in issue 28. My first published short story,ever! Ever since I've been buying this magazine as the stories featured are really great, all killers, no fillers. The magazine features established authors, this issue features Ken Goldman whose stories have appeared in over 700, (yes 700!) independent publications worldwide. Also featured are some great up and coming writers like Brooke Warra who has appeared in Sanitarium before, alongside yours truly, in issue 28 with Spineless

As stated on the back cover it is the perfect length for your in between reading. It's great to dip into on a boring commute into work. There's also some great articles on witches, zombies and the horror genre. There's an interview with author Josh Malerman and dark verse from Ian Sputnik, Austin Muratori and Layla Cummins.

Here's why you should be reading Sanitarium Magazine 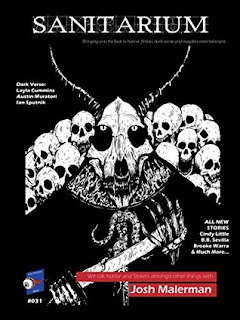 The Peculiar Death of Barnabas Crackle by Brooke Warra


The Spider is the greatest of all predators. It spins a web and simply waits. Unfortunately Willy McCorkle, on the prowl for a nest egg to set him up financially, lacks the intelligence to hunt like a spider. It's a few more brain cells he should be looking for rather than cash.

A highly visual tale with an unusual take, this is an author worth finding out about which you can, click here to read an interview with him by www.gingernutsofhorror.com


A creepy tale that illustrates just how weird high school can be.School is a testing time, a rite of passage that can make or break you. It's not just getting good grades and fitting in with your school friends, you've also got to deal with nightmare teachers. Some of them can be terrifying and you don't want to fall under their radar. The exams you sit at the end can change your life forever but you never know what's waiting for you in the exam hall.


The Grinder by Craig Herrick


There's a dark secret in the wild woods surrounding a small town. The first and only line of defence rests on the shoulders of Sheriff Garth Thatcher. But can he rise to the challenge?

What Doesn't Kill You, by Cindy Little


How far do you have to go in order to find your inner strength? Maya, an assistant professor of sociology goes on a remarkable journey that turns her life around. But will this change be for the better?

Black and Yellow Spiders by B.B.Sevilla


A short tale that wonderfully capitalises on our fear of the unknown and of course spiders.

The Muse by Jessica Bayliss


Reads like the opening to a great feel good novel but of course this is a horror story. Four strangers arrive at Cobbler House greeted by a mysterious woman who aids them in their search for inspiration in their creative projects. But what exactly is inspiration? Does it really exist and how much will it cost?

Birds and the Bees by Thomas Kleaton


There's nothing sweet in this short tale about the birds and the bees. Lacy goes to stay with her beloved grandma during the school holidays, a holiday neither will forget. This great little tale warns us that nature is not sweet and innocent but wild and savage.
Posted by S.J.Budd at 02:38