The Maker's Box by David Barclay 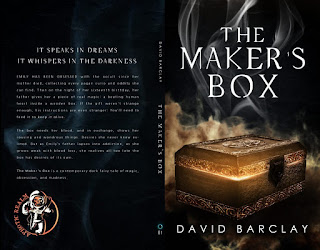 Emily has been obsessed with the occult since her mum died, collecting every pagan curio and oddity she can find. Then on the night of her 16th birthday, her father gives her a piece of real magic; a beating human heart inside a wooden box. If the gift weren't strange enough, his instructions are even stranger; You'll need to feed it to keep it alive.

The box needs her blood, and in exchange, shows her wondrous and rousing things. Desires she never knew existed. But as Emily's father lapses into addiction, as she grows weak with blood loss she realizes all too late the box has desires of its own.

The Maker's Box is a contemporary dark fairy tale of magic, obsession and madness.

The Maker's Box by David Barclay is a very dark tale about a dark heart. It is the second novella to be released by Aphotic Realm the home of dark and sinister fiction. I really enjoyed reading Nightcrawler by P.A.Sheppard and knew I was in for something really dark!

On her 16th birthday Emily is given by her father a box. Inside is a heart still beating. Her father trusts her to look after it and tell no one. This is a heart that belongs to someone really special. All she needs to is give it a little blood every now and then.

Soon Emily and the heart form a strange connection. It speaks to her and understands her desires like no one else. The heart must be fed from Emily's own blood and soon inhabits her dreams.

It doesn't take long for her friends to become concerned about Emily, especially Noah once she tells him of her strange dream about a magic man named Lock. He becomes even more fearful for his friend when he discovers at the library that this man is real.

I really liked this tale, it was unusual and probably one of the darkest tales I have ever read. Emily, the main character is so sweet and innocent and watching her feeding and caring for the heart like most girls her age would care for a cute bunny was just so sinister! You really want someone to step her and save her from the heart and from her father who clearly has secrets he's hiding from his only daughter.

Emil's family has a very dark history which has been kept hidden from her, can she figure it out before it is too late?