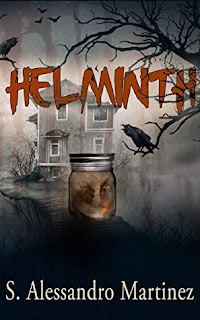 Rei would do anything for those she loves.

As her best friend, Abby, struggles to cope with the sudden loss of her husband, Rei and her closest girlfriends take her to a beautiful lakeside house nestled in the forests of the Pacific Northwest, hoping that a weekend of support from long-time friends will help Abby along her road of emotional recovery.

But as the young women get settled, Rei begins to notice there’s something wrong with the place. Could this peaceful, idyllic location be hiding an ancient evil below the waters of the lake? Or are the problems wholly within Abby herself, who seems to be losing her grip on reality? When unexplainable, nightmarish things occur, Rei realizes this weekend getaway may turn into their last outing.
New from Omnium Gatherum is S.Alessandro Martinnez's debut novel! I've read a few stories from Martinez over the years and was really excited to have the chance to read his debut novel.
I really enjoyed this novel about four friends who come together to help their friend. Abby, has been in a terrible accident, she's lucky to be alive but she's lost everything.
Rei, one her her best friends since childhood, is no stranger to utter loss and desperation, she's been through traumas of her own ad is determined to help her best friend overcome hers.
Rei's parents own a secluded country home situated right on the lake, it will be perfect for a weekend away with Abby and her other bets friends. Over the years they have drifted apart as adulthood as set it. But this weekend will provide them all with the perfect chance to reconnect and heal.
But of course, this is a horror tale and plans soo go awry! There is something strange with the house which Rei can't quite comprehend. Abby is acting strangely too, but that's to be expected after her ordeal, or it it being caused by something else?
They may not be entirely alone on their vacation. They've only gone for the weekend but it will feel like the longest holiday they've ever been on.
The tale starts off as a slow burner but it lets you get to know the characters who really drive this story. I really liked Rei who is always thinking of others before herself.
But it doesn't take long for the creepiness to seep in, and it gets really creepy! When the tale comes together it's really terrifying. I don't want to say too much and spoil it for those yet to delve in to the terror of Helminth but it's a really fun but brutal read!
About the Author
S. Alessandro Martinez is a horror and fantasy writer living in Southern California. His writings have appeared in several magazines and anthologies. He was first published in Deadman’s Tome with the story ‘The Corruption in the Deep’. He enjoys writing about all sorts of horror, especially about unspeakable creatures, body-horror, and supernatural terror. He also enjoys writing high fantasy. He has a fantastical world of his own creation filled with stories of mystical and terrible creatures, fantastic races, and powerful magic.
Posted by S.J.Budd at 04:09