Asylum of Shadows by Stephanie Ellis 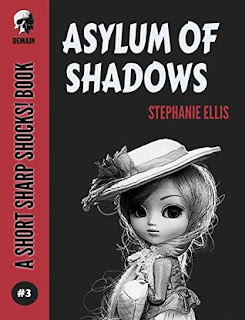 Amongst the slums of Limehouse stands a new hospital, a monument to Victorian philanthropy. Marian, destitute and about to be orphaned as her father succumbs to the ravages of syphilis, is taken there by Dr. Janssen. This eminent physician offers her work and a roof over her head. Employed as a seamstress, she stitches shrouds for the dead and hoods for the hangman. Marian is taken to the ward of St. Carcifex. This shadowy ward receives the recently deceased, particularly those who have hung from the gallows. Her task in this gloomy place is to watch over them, make sure the dead stay dead. On Marian’s first night, she is charged with the care of two murderers, who, despite their hanging, do not appear to have the expected deathly pallor. On the second night, these guests are joined by innocent, hard-working men, victims of an unfortunate dock accident. Marian is enraged that such should be forced to share the ward. As her own mind falls victim to the ravages of the disease which killed her father, she metes out her own justice, her own vengeance – on dead and alive alike.

I'm a massive fan of Demain Publishing's hugely popular Short Sharp Shocks Series of dark tales which is now in it's second season! I haven't read one story I wasn't completely blown away by.

This time I decided to delve into An Asylum of Shadows by Stephanie Ellis, a horror writer from the U.K. who I first got to know when we collaborated on Diabolica Britannica a British themed horror anthology which raised money foe the NHS during the Covid Crisis. I absolutely loved her terrifying folk horror infused tale so leapt at the chance to read more of her work. 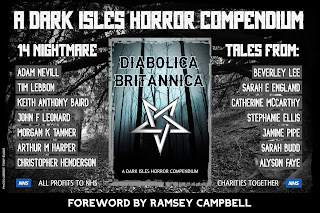 Asylum of Shadows is set in Victorian London where poverty an disease was a normal way of life. Immediately I loved the atmosphere of East London's cobbled dark alleyways and dark nights.

We are introduced to Marian a young woman, who at such a young age has been through so much, and is now nursing her father in their home they are about to lose. She is still full of hope for his recovery but when the vicar arrives she knows it is the end.

The visiting doctor agrees to take on Marian and provide her with board an employment in his hospital. It is a lucky opportunity that saves her from the work house.

She is given a job in a hushed ward, Saint Carnifex, overjoyed at being given a second chance at life. She throws herself into her work. It is a job many others before her have failed in not being strong enough to handle the conditions. However as someone who is familiar with death and tragedy she fits right and is keen to prove herself to the ward sister.

What I really loved about this tale was the atmosphere which is claustrophobic at all times and sinister. I really felt like I had gotten to know Marian in just a few pages which gave the tale a big bite at the end.

This was a really sinister story which just gets darker and darker with each turn. It was perfectly executed and wholly believable which made it even more scary.

I can't wait to read more from Stephanie Ellis and from Demain.
Posted by S.J.Budd at 10:32