Only The Broken Remain by Dan Coxon 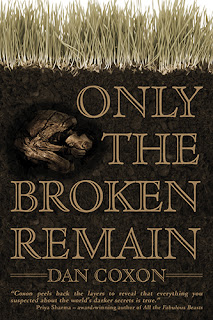 I could see into the room well enough, but there was nothing there. No furniture, no ornaments. A rusted sink streaked with black and grey. An empty light fitting. Nothing more than a thick layer of dust on tired linoleum, forming a furred carpet that stretched undisturbed into the empty room beyond… There was no neighbour. It occurred to me for the first time that I might be going mad.A young man joins a circus where the mysterious ringmaster is more interested in watching him fail. An immigrant worker forms an unlikely alliance with his housing estate’s foxes. A fraudulent accountant goes on the run, but loses herself in the dry heat of Australia.This debut collection from Dan Coxon unearths the no man’s land between dreams and nightmares, a place where the strange is constantly threatening to seep through into our everyday reality. Populated by the lost and the downtrodden, the forgotten and the estranged, these stories follow in the tradition of Thomas Ligotti, Robert Aickman and Joel Lane. Because when the dust has settled and the blood has been washed away, Only the Broken Remain.“Dan Coxon’s subtle, delightfully dark tales creep up on you from the shadows, then refuse to let you go. I devoured these stories about crises of identity and reality being undermined after glimpsing something inexplicable from the corner of your eye.”—Tim Major, author of Snakeskins and Hope Island“Coxon writes stories filled with surreal, precise menace. Only the Broken Remain gripped me throughout.”—Aliya Whiteley, author of The Beauty and The Loosening Skin

Only The Broken Remain by Dan Coxon features 14 fabulous stories that I guess you could classify as weird horror with a British flavour. However I think Dan Coxon is one of those rare writers that are hard to pin down and define.  The award winning author has been published in many prestigious magazines such as Black Static, Nightscript, Not one of Us, Unsung Stories and many others. He's also the editor of the critically acclaimed Tales From The Shadow Booth anthologies as well as This Dreaming Isle.

This collection, which I immensely enjoyed, features a motley crue of down and outs, people who once lived like us but had something about them irreparably broken. Yet they are still unwilling to give up, choosing instead to forge a survival when and where they can find it.

Most of these stories start off sounding normal and mundane but when you look closer you realise there is something not quite right. All these stories united by a thread of cold anxious dread seeping in through the pages. Darkness is always underfoot and there's no telling how it will strike. It's a quiet sort of horror that creeps in slowly from the edges of normalcy but once it has you it is final.

These stories exert a powerful realness, that they could happen to anyone, they warn that any one of us could slip through the cracks of society and find themselves lost and alone.

I loved the attention to details in these stories, Dan Coxon paints a really vivid picture full of atmosphere but keeps the pace moving quickly.

I really enjoyed all these tales but my stand out favourites were;

Previously published in one of my all time favourite magazines; Black Static. This tale features a disenchanted immigrant, Stannislav moving to the UK for want of a better life but ends up working in a chicken shop.  Mistreated each day by his boss Mr Sharples, starving and abused he forms an unlikely friendship, and in numbers there is strength.

Only The Broken Remain

Possibly the darkest tale in this anthology. This was creepy from the first word. Allison the young woman of the tale had been to hell and back and would be on the road to recovery if it weren't for the fact she can't any sleep. Her new neighbours are the source of some strange night-time activities and when she battles with her agoraphobia to go and knock on their door, she realises there is no next door. But where are the noises coming from?

Set in an isolated small community somewhere by the sea, this is British folk horror at its best. One day a father and daughter hear a strange whisper when they spend the day at the coast. At first the father thinks it is just childlike imagination but then he starts to hear it too, so does the rest of his small village. Baddavine, the voice rasps over and over again. It drives them mad and one night they all go together to challenge the intruder.

Down and out Cedric works at a pub, terrorised by Gary Chiltern and his gang. Each day gets a little harder but he needs this job. Gradually he is pushed away from society and starts to find refuge in the local woods that have a rich history with his family. It's the perfect haven until Chiltern spots him going there alone one night...

All the Letters in His Van

A couple embark on a walking holiday with the intent to relax and get a break from their crumbling attempt to start a family of their own. They end up up getting lost but thankfully find a quaint little village to rest in.