A Seed in a Soil of Sorrow by Keith Anthony Baird 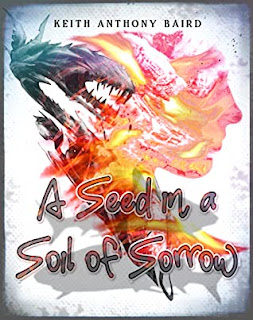 When the death cult calls ... what are you running from?The path to the Viridian Chapter is paved with many sorrows. It's a sect which sits on the site of a brutal atrocity, and one which harbours numerous dark secrets. Leader, Hans Lehmann, is a visionary bestowed with remarkable abilities, with followers who are prepared to offer their lives in exchange for his promise of a utopia.On the cusp of autumn, a lone seeker arrives to discard his former life and embrace his rebirth as a chapter disciple. Stark lessons within a strict regime are the lure for those who have been traumatised by their uncaring past. The promise of a doomsday ascension through the waste of flesh proves at odds with a union between two souls who must flee the confines of the commune, if their love is to stand a chance of being fully realised.But will the inner circle elite discover this betrayal and exact a terrible retribution, or will they escape the clutches of the sect's unstable originator and lift the lid on the culture of violence within?

Tobias, a young man barely 23, runs form the pain of his old life looking for a way out. He travels across Europe where he meets Han, a father figure like no other who takes him in when he joins his sect, The Viridian Chapter. All he expects in return is complete surrender.

This is a great short story that I found really disturbing and truly horrifying. The horror pure psychological. I just think there's something really creepy about cults where vulnerable people are taken advantage of, their lives and even minds changed forever.

It's a really gripping tale, I easily read this is one sitting. I've read Keith's work before so I knew it would be dark! He's a master at pulling you into a tale.