The House by the Cemetery by John Everson


As a fully fledged bookoholic I'm really struggling right now, and its all because of Flame Tree Press...

This is the sixth title I've read and each title has blown me away. Each author is unique but they all know how to weave an amazing horror tale. They're really raising the bar of what defines amazing horror. 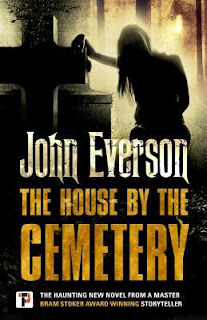 Rumor has it that the abandoned house by the cemetery is haunted by the ghost of a witch. But rumors won’t stop carpenter Mike Kostner from rehabbing the place as a haunted house attraction. Soon he’ll learn that fresh wood and nails can’t keep decades of rumors down. There are noises in the walls, and fresh blood on the floor: secrets that would be better not to discover. And behind the rumors is a real ghost who will do whatever it takes to ensure the house reopens. She needs people to fill her house on Halloween. There’s a dark, horrible ritual to fulfill. Because while the witch may have been dead... she doesn’t intend to stay that way.

This was a really fun read that doesn't take itself too seriously, all story and gory! It's a novel take on the much loved Haunted House trope.

The story starts with Mike, a carpenter, being drafted in by his long time mate, Perry, to refurbish an abandoned haunted house that's garnered a sinister reputation throughout the years. Their plan is to do it up int he they style of a haunted house and open it up to the public for a killing.

Whatever reservations Mike puts aside, immediately when he starts. There's a strange atmosphere of something being of kilter. The house doesn't feel right to him and gives him the creeps. He thinks only trouble will follow if this house is disturbed,  but ever since his wife left him he needs the money and a big project to take her off his mind. Soon he starts finding bones hidden int he walls and sealed off secret rooms and passageways but is determined to finish his job and land a big fat pay check.

Strange occurrences at the house continue, Mike hates being there all alone . Of course  it is situated in the middle of nowhere, by a cemetery. His fears are assuaged when he is joined by two girls, Katie and Emery. One is beautiful and breathtaking, the other is quite and off putting.  They are all too eager to help Mike transform the old haunted house. He doesn't question where they came from or their motives.

There's a whole bunch of other characters too. The story focuses on other members of the team who are getting the house ready for the public. There's a team of make-up artists and set designers all united in their love of horror.

I liked the slow build up to this book, you could just sense something big was going to happen. Let me tell you it was BIG. I had to admit the twists in this tale were fairly predictable but its still a great read, a gripping page turner. I stayed up late one night to be able to finish it. There's no way I was going to get any sleep without knowing the ending and it was worth spending the next day being really tired.

I find it strange I have never heard of this author before but will definitely be looking out for his other books in the future.