So in a nutshell this is a book about witches and a kick ass woman!

Crone by Jeannie Wycherly came highly recommended through a book reviewer who has a great blog at The Grim Reader It's currently on sale for just 99p so I thought why not.

To be honest it was the word witches in the description, that did it for me. I love great stories with witches in it and also just look at the author's surname, Wycherley! Could a name be anymore witchy!? 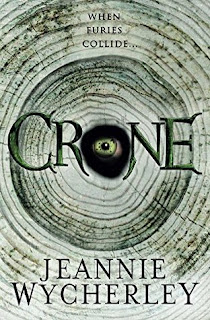 What I really liked about this book is that it celebrates the strength that women possess, that we're always stronger than what we think we are. I guess most of us aren't as physically strong in the way men are but it doesn't matter as we're strong in other ways. As illustrated in this book, if we dig deep enough we have the power to heal ourselves and others even, to protect our loved ones and even to forgive. The main character, Heather, is a prime example of this. She's a very quiet heroine, not feisty and fierce like some people,(ahem Aefre) but she refuses to give in no matter how bleak and hopeless things look.

The characterisation of Heather was brilliant,she was so relatable and I could really see her as a real person. You can really feel her grief for her son, Max, and take pride in her desire to keep on fighting, in the hope she will learn to live again.

In contrast, Aefre is an example of that woman who cannot forgive and move on with their life. People say that hate is an acid which rots us from within and this saying really applies to her. But having said that she's a great character!

One thing I hate about stories with witches in them is that they are always portrayed as evil.I find this irksome as the reason so many women were persecuted in during the witch hunts was because men feared powerful women and their intelligence and sought to destroy them by either burning them or discrediting women. But in this book evil witches are nicely balanced with good witches who care.

I really enjoyed this book and read it in a matter of days. I just couldn't put it down particularly at the end. I kept thinking how the hell is Heather going to get out of this crazy situation. The plot was really clever, fantastical but really believable too. The ending was so great, all the little loose ends were tied up particularly with the White Cottage. I thought that was a really nice touch.

It was a book that is really easy to get into, it starts off fairly gently but really begins to pick up the pace particularly with the ending. I was torn between desperately trying to skim read so I could find out what happened but also wanting to enjoy it at the same time.

This is the first book written by Jeannie Wycherley I will definitely be keeping an eye out to see what she writes next. This is a one off book but the world that she has created is so cool she could easily write another one in that setting.