Super excited to announce the upcoming release of Monster's Exist, by Deadman's Tome which features one of my stories, the Murder of Crows.

Along with a bunch of other great writers, we aim to explore what is monster, what forms do they take, their methods they employ, but more importantly do they exist? 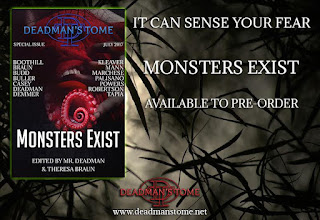 Master Vermin by Wallace Boothill
Legend Trippers by Theresa Braun
The Murder of Crows by S.J.Budd
Wicked Congregation by Gary Buller
Playing Dead by S.E.Casey
Lake Monster by Mr Deadman
Never Sleep Again by Calvin Demmer
The Voice from the Bottom of the Well by Philip K.Cleaver
Eclipse at Wolfcreek by Sylvia Mann
No.7 by William Marchese
Criatura by John Palisano
Bitten by Christopher Powers
Kelpies by Leo X.Rovertson
Bloodstream Revolution by M.R.Tapia

If anyone would be interested in receiving a ARC in exchange for a review please get in touch!
Posted by S.J.Budd at 13:46