Morpheus Tales is a  top independent UK publishing company that has been running since 2008. They publish a quarterly magazine celebrating the top new horror  and weird fiction around. You can purchase many of their back issues and special themed issues from their website http://www.morpheustales.com/ for next to nothing.

In this Anthology  Morpheus Tales, The Best Weird Fiction Volume 5 (Edited by Adam Bradley) you'll find a dark hand picked selection of the finest macabre stories. In here we learn of the strange machinery capable of ripping apart the very fabric of reality. What it is that waits for us on the other side? You'll hearts will be warmed by romance that doesn't go according to plan, of friendships turning sour and strange creatures that like to play with their prey. 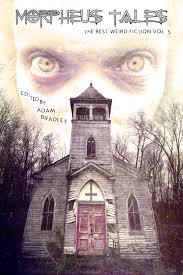 The Cherry Tree by David Lear

"Thirty Chimes Avenue is a ramshackle, with it's rotten front door, broken and boarded windows, and skate tiles missing from the roof. And in the sprawling back garden a cherry tree stands stranded in a sea of weeds and brambles like some hapless vessel."

Ted, a retired seaman lives out the end of his days in grief of "unfathomable depths." He is haunted by a beautiful tree with a dark history. Each day he prays for forgiveness and hopes to atone for his sins but are his prayers ever heard?

"Gordon paused, hunched over the corpse, breathing hard and cursing. The rain rolled down his forehead and hung on the permanent grin plastered on his blood splattered face. He lifted his head slowly towards the clouds and howled to the otherworldly thing that had brought him to this act."

Three high school friends take one last adventure after graduating from college, travelling across Europe before they head into the real world. They need one last souvenir of their collective friendship before they go their own ways.

"There in the shadowy chamber of the former King's citadel, Ghallard found that marvellous sword abandoned behind a heavily bolted door sadly neglected and left in the bony hands of a rotting old skeleton."

Soulshredder;  an ancient sword born from unholy fires from unknown origins. It has an unappeasable appetite but surely Ghallard the Virtuous will be strong enough  not to fall under its spell?

A Silence Between Two Waves of the Sea by Robert Sagirs

"I don't get it," she tried yet again. "For years you hardly say two words about your life here and then you drag us across the country like it's an emergency or something, and I can't get you to shut up about your childhood."

Carl is still searching the universe for its secrets after losing the joy in his life. The last time he ever laughed was during a childhood accident that nearly claimed his life. But now he wants to delve back into his past and face his problems head on.

The Children's Garden by Sean Logan

"All right, so what are we doing?" Jay said as he bounded down his front steps and out into the crisp night air, feeling that charge he always felt on Halloween.

Jay  breaks his sister's heart for not taking her out trick or treating on Halloween as they usually do, he is too grown up for treats on Halloween he wants to trick instead with his friend and heads to the Children's garden...

"Bundled up in discarded threads plucked from trashcans and homeless shelters, Syd recognised the harbingers of the season. On her perch in the highlands of the Apalachians, clawing at the twilight, Winter sat scheming. Tonight she tainted the winds with a whisper and a promise. December would answer to her."

Syd, a down an out homeless guy gets wind of an incredible opportunity that will not only get him a decent warm meal in his belly but also see him through the cold approaching winter. All he has to do is shoulder the burdens of one man's guilt.

"I never took the time to tell you about my job and now I wish I had. I can't help but think it's too late, but it's worth a try. Maybe something I tell you today will help you get through."

A father comes to visit his son who's been left comatose after a nasty motorbike accident refusing to squash hope for his son's recovery. After all his work as a prison officer has allowed him to meet some curious individuals such as the mysterious prisoner who lives off the love of his craft.

"Do not look at them."
"What?" Tom Ellis blinked and turned around. His guide and translator was staring straight ahead. Tom frowned. Jamal, an old man with skin the colour of old leather left out in the sun too long, had a face that rarely changed expression. What some might call imperturbable. This sudden tension was strange to see.

Tom Ellis travels to the desert just outside Marrakech in search of ancient myths and legends. Along with his trusty guide, Jamal, he hears of the dust devils which inspire fear in the locals but all he sees are innocent dust clouds and overly superstitious locals.

"This jungle was filled with monsters, but none more frightening than Him."

There's a darkness that prevails to bring back the light from those who think themselves kings.

"Nate Ellis took  a sip from his coffee mug before he settled down in front of his computer. His novel was already up on the screen, and though he was not quite ready to work yet, he knew what he was going to do today.
He was going to kill Chud Quiver."

One of the joys of being a writer is that there is no limit to what you can create from your imagination. Just imagine if you were able to create characters so vivid, so passionate they seem to come alive...

The Key by Matthew Piskum

"With his tie loosened, I reach beneath his pressed, white shirt and grab hold of the thin black chain around his neck, the one he'd tried so desperately to hide form me."

A young man's father wants to take his secrets to his grave but his son follows him and takes the very thing he tried so hard to conceal.

The Depredators' Club by Deborah Walker

"It was good to be back. Molly Kroner was in the Depredators' Club for the first time in ten years."

Molly is back in the club and after recievng her first commission in ten years she's eager to build up her reputation. But there's a full moon tonight, Quentin's warned her that some things shouldn't be taken but £5k is £5k.

"A night in on my own was a rarity, a time to savour. With  no whinging wife around, I intended to make the most of it. So off to the store I went for my bits and bobs...

A poor mistreated husband just wants a few minutes peace and will go to any lengths to find it.

Seasons in the Abyss by Anthony Baynton

"I write this in the hope that, should my nightmare befall another, they will be prepared. A vain hope, I suspect, but as my last act I can find no more honourable task."

A chilling tale that draws upon ancient legends of creation  where one man discovers what awaits us on the other side.

"There's an itch under my scalp. A tingling at first, almost an abstract feeling, it's there, but it isn't, not fully until I can define it as an itch."

In this tale our protagonist is torment by a twilight visitor. It just wants to play...

The Function Room by Matt Leyshon

Gloom pauses, unsure that he has heard correctly. He too has detected a change in their routine, a shifting in the dismal spheres they inhabit.
"Three? he asks.
"Three," says Daisy.

It's just another normal day in Ledenton until Daisy buys three chicken livers for her cat throwing Gloom the butcher entirely out of orbit.

When the Letter came by Matthew Acheson

"I was in a very curious emotional state when the letter finally arrived. I had gone to check the post office religiously every Friday afternoon and each time I had returned empty handed until. There it was at last, in my trembling hand, shining like a bolt of cleansing fire out of the heavens-the letter."

Mr Browne has been trying to solve an impossible puzzle for many years . His ad for help in the newspaper is finally answered by a letter from an eminent maths Professor confirming he's solved the elusive puzzle. Mr Browne is delighted to say the least, there is so much more than a burning curiosity to solving this puzzle left by his father, his future depends on it.

The Birds of Averrone by Kyle Hemmings

"When the birds of Averrone circle above you, it means your lifeline is running out."

A young boy grows up in awe of the mysterious birds of Averrone, he's not afraid of them. He's afraid of what's going on inside his own home.

"I open suddenly to the ceiling and look around a room. My head swivels panicked. The room comes through in an unfamiliar static with voices full of giggles and tears between the walls. Eyes from every-nowhere penetrate through the layers of heroes and ghosts laced into my woven cage."

Each and everyone one of us has at least one nagging voice inside our head, usually the voice of reason that tells us to not eat the 8th slice of pizza but what happens when that voice has no reason or sanity?

"I had left my keys in the trousers I had put into the washing machine and the lining of the drum had torn; so it was I came to fall in love with one of the damned."

M falls in love at his local launderette, but she's one of the damned but for M love is blind in a world turned upside down.
Posted by S.J.Budd at 01:32