They Walk at Twilight by Mary Williams

Mary Williams was Cornwall's leading ghost writer who wrote 17 volumes of superb ghost stories which are mostly set in Cornwall. She remains as mysterious as her stories. There is very little information about her despite her incredibly sucessful writing career which also includes novels such as the Dark God. It is such a shame that she is not more well known.What is clear is that writing was her passion in life, she passed away at the grand age of 97  in 2000 and was apparently working on a new collection of ghostly tales.

Her tales are dark yet cheery and full of charm. This collection, They Walk at Twilight was first published in 1977. It's deeply atmospheric with dark undertones reminscent of a Daphne Du Maurier novel. Mary Williams is a master with invoking dark and foreboding atmosphere in which anything seems possible. Most of her tales are set in Cornwall where she draws upon it's ancient mysteries and celtic magic for crafting her wonderful evocative stories. 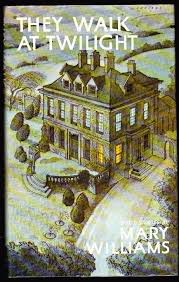 They Walk at Twilight

"It was only at twilight that the house came alive...at least for me, although I'm sure my parents had no idea what went on upstairs."

Jessica and her parents have moved to a lonely house, Rozzan, on  the Cornish Moors after her father, a University professor takes retirement with the aim to write a book on the moor's local flora and fauna. It all seems so idyllic the house is large and there's even a servant. But Jessica knows there's something wrong with Rozzan and wants to leave. It's no place for a young girl like her. She's just so bored and would do anything to be free and have fun.

"She was a strange looking child; small, thin, not strictly speaking beautiful, but magnetic with her tumbled hair, so fair it was almost white, elfin gestures, and pointed features with those large, cold, very clear grey eyes."

Whilst on holiday in Cornwall with his family Alex meets a young girl called Emma. She seems more fey than human and despite only being a child she posesses a deep knowledge of unfathomable things. Alex strikes a deal with her, he'll be her slave forever if she can make it rain which she does. Will Alex be able to tame the wild girl or will he be prey to her whims and fancies forevermore?

"I was standing in the middle of a cold road, and I hadn't a clue how I'd got there. My mind was blank, but at the back, somewhere, beyond the recess of memory, was an opression and darkness filled with creeping terror that lingered heavily in the green-grey light of an early dawn."


Charlie Noakes comes to in the middle of a lonely desolate moor. He is in dire need of shelter warmth and food. He comes across a lonely towering hotel in the middle of nowhere. The place is terrifying, a place he vaguely remembers from his youth. But there is nowhere else to go if he is to survive.

"I wanted to get away. Death itself seemed to stalk the garden, wafting the undergrowth and stagnant damp bushes, lifting the dead leaves like shrouds from their decayed corpses, revealing to my disordered fancy the skulls and bones of countless entities which had once lived and breathed."

Good friends Hugh and Dick have recently graduated from university and decide to take a walking holiday of the West Country. Hugh brings Dick to an old out of the way Victorian house just outside the village of Cottingley to meet the woman of his dreams, Shirley. But she comes with a twin Lucy who is a force of nature, the darkness to Lucy's light. She exerts a strange hold over her gentle twin, will she ever release her to Hugh.

"I did my best to shake off a weird feeling of bewilderment which was intensified by the thin shivering mist already subduing the glitter of sun."

A writer takes a vacation in Cornwall to soak up inspiration for a new book. There she encounters a trio of women who sit in huddled conversation and take off when she approaches. But who are these strange women and what is it that they talk of?

"I have to tell this tale, because of course I could not write. But in the soughing of the wind's cry sometimes through autumn trees, or in buttercup meadows at the twilight hour...maybe the echo of our soundless feet may be heard throught the grass... and a momentary picture ressrrected on the ether. For this is a haunted place. Haunted not by greed or revenge, but by the trespasser into time itself...love."

Frances Abigail Treffick the fourteen year old daughter of Sir Frank and Lady Treffick of Linmere Manor becomes fixated with visiting the ruins of an ancient monastery. It is her last summer before she attends boarding school but she is reluctant to leave it behind and say goodbye to her precious doll Abby who exerts strange and powerful hold over her.

"Grawk! Even at the start of a brief late summer holiday I didn't like the sound or the look of it. It appeared, and felt, a 'dead' kind of place; no wind stirred the heat-haze when we arrived."


Phil Carnberry, Professor of History and Geology has different ideas on the origin of mankind and along with his friend he visits the ancient village of Grawk in Cornwall. The villagers are just as inhospitable as their surroundings but the men refuse to leave despite warnings. Phil wants to unover the secrets of Grawk but it wants to be left alone.

"There was one of them big shining moons in the sky most of the time, with only whiskers of cloud blown over its face t'wards morning. Then the winds began to shiver properly through the trees and my old bones shook with laughter."

Annie and her beloved husband Hubert have unwelcome visitors in their home but she has a plan to get rid of them once and for all.

"She started to tremble, as the ground appeared to sway beneath her feet and lurch upwards...towards her. She looked round, shocked. She shouldn't be here...she'd come to the wrong place."


Memories can be happy but some can be so painful that they are repressed into oblivion  but they have a habit of coming back with such force they can transport you through time.

"...she was confronted by the 'thing'...the figure of an immensely tall woman dressed in black, staring at her malignantly by a slab of  dark marble; one hand pointed downwards to the gleaming surface."

Caroline, after being plagued with a horrific childhood nightmare finally finds happiness when she meets her husband, a man twenty years her senior. She moves to Cornwall with high hopes to start her married life. But upon arriving there all is not as it seems and she questions how well she really knows her new husband

"The pause that followed was prolonged, holding, however, an intensity that was somehow electric...highly charged with unspoken thoughts...an awareness of things beyond my grasp which I found distinctly disturbing."

Charles Hallett encounters a strange hermit whilst out walking in the rough and rugged Welsh mountain. He presents Charles with an interesting proposition, one that he can't turn down.

"It's as if we were supposed to meet, although of course I  haven't the slightest interest in him. Not as a person, just as a symbol. He's an omen you see. A omen of 'luck'... or 'take care.'


Polly Brown never thought she would find love but then through a chance encounter she meets a mysterious stranger who saves her life. However quickly he dissapears only to return on numerous occasions she's desperate to meet him and when he turns up on her holiday in Eastbourne it appeers to be destiny taking a good turn.

"She just liked to wander about on the fringe of things, looking in briefly on our rather 'adolescent ' bottle parties, then taking herself off subtly when no one was noticing, leaving a peculiar vacuum behind."

In Port Garren, Cornwall a group of  artists forge friendships. They live a life free of restrictions away from the rat race. At the centre of their friendship group is Gerda a beautiful but unobtainable woman who drives men to despair with lust and longing. Some believe she has a secret lover who she keeps out of sight.


A woman after a brief stay in hospitable is desperate to get back to her doting husband Rupert who simply can not live without her.

"CRAKKA. It sounded quaint somehow, out of the norm; and as events were to prove this was putting it lightly."


Roger Herrick stumbles across a strange village whilst exploring on his bike in deep Cornwall. The inhabitants there lead a very different life under the influence of strange forces.

"Maybe you think of the sea as most landlubbers do and city folk do...merely compelling and unpredictable; calm and dream-like one day. wild and surhing the next; an elemental force to stir the imagination.... Well that's I thought myself, once. Until that evening longer ago when I care to remember; when I saw."

A naturalist travels to Cornwall to discover more abot the local flora and fauna with a hope of being about to write a book about his discoveries but what he discovers is dark and foreboding, the stuff of nightmares.

"The sky seemed to darken subtly, hovering over the dejected hall and soggy earth, shrouding the landscape covetously, as though the area sensed our presence with elemental resentment."

Living in the shadow of an abandoned house, Wildmarsh, Martha develops a deep and lasting obsession with the strange and remote place. Often she takes secret visits there her friend urges her to stop going before it is too late.

"For a moment the queer feeling of unreality returned to him. Her large form seemed to fade and quiver, receding temporarily into the general glitter of gathering heat haze, sunlight and sea."


Jim Parker  an esteemed journalist take a much needed break at the advice of his editor to sunny Cornwall. But all he can think about is landing the story of his career, it all seems so hopeless until he is reunited with a face from the past.
Posted by S.J.Budd at 11:19