A collection of 12 brilliant short stories bought to you by Sirens Call Publications, that takes a fresh look at some infamous and dark myths and legends, and asks if they're myths or reality...

But these are not the gentrified and harmless tales you could entertain children with. Delve inside and you will discover that things are not as they seem, old gods still walk amongst us and their powers prevail, riddles still need answering, and we can't escape our past.

You can show your support for your fellow writers and independent publishers by buying this book, which is available through Sirens Call Publications or Amazon. They have a great selection of anthologies! 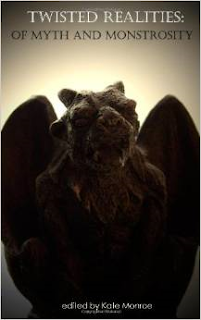 It Lives In Us ~ Thomas James Brown

In  the  picturesque village of Lynnewood in the New Forest, there's a terrible dark secret that hangs over this otherwise peaceful village. What are these things and where do they come from? What can be done to escape them?

This deliciously dark story takes place in the present day but has the charm and feel of a tale set hundreds of years ago. It evokes old celtic deities and demons intertwined with past and future and switches easily between serene village life and a macabre past adding to a tense and foreboding atmosphere.

There's danger afoot and Michael will do anything to save his father. Re-emergence explores the duality of the feminine aspect represented by the sea and its  eldritch creatures.

It dispels the myth that us girls aren't as delicate or benign as we look. For only women have the power to give life as well as destruction which is represented by the female element of water.

Re-emergences asks what sacrifices would you be prepared to make for love. What would you do for your own kin, how far would you go for survival?

An archaeology student is with her boss on an excavating mission, but she uncovers much more than an old ancient mosaic. Unearthed primal forces act to awaken old lusts that have been supressed for centuries. Similar to the  imposed Roman way of life clashing with the traditional Celtic way of life in Britain Andrea finds her way of life clashing with those around her, and finds herself with a heavy choice; instinct or intellect?

What happens to mythical creatures when their purpose has expired? How do they live out their immortal days? Are they looking for love and companionship like us, or are they something worse? Don't want to say too much in case I give too much away.

If you ever thought it would be amazing if the old deities and myths could live amongst us, think again. They're as monstrous as they are fantastic, they're not as nice and cuddly as dear old Santa Claus!

Maybe they do still live amongst us? How can we know if they're just a figment of our imagination? Voices by Kate Monroe expertly blends the modern with the past to create a great tale.

A dark tale of two brothers, one ruled by passion, the other by greed, but both are in love with the same woman who is unattainable for the both of them. But what would you do to keep the woman you love?

A unique tale that draws from Ireland's rich source of folklore and legends. Aisling Grey thinks she's in store for a peaceful relaxing weekend with her best friends, but she's very wrong. This is a great tale of  unbound ancestral spirits coming back, half forgotten superstitions that should never have been lost.

A highly original tale concerning the idea of parthenogenesis, the ability to reproduce asexually. It's true that most of us only use 10% of our brain at one time but what if we could be engineered to achieve our full potential and unlock all the secrets hidden in the human genome?

Could this be used for the greater good? Or is man eternally corrupted? Edward Lorn's dark and mysterious tale poses the question of what makes us human? Are we nothing more than a sum of body parts? Are our thoughts and actions controlled by our DNA or our souls?

Hades and the Hydra ~ Amber Keller

There is a dark prophecy hanging over the world? Does it spell the end?What if there is such a thing as the Underworld? Do we share our world with malevolent forces far more powerful and destructive than us? Are humans little more than toys between powerful gods.

A couple embark on an idyllic relaxing holiday in the south of France, but it is anything but serene. Matt and Hannah seem to have the perfect life, but appearances aren't everything. And as the title suggests, what price would you be willing to pay to have all your dreams come true?

Be careful what you do as it could come back to haunt you, a tale of cold enduring revenge. Time is said to be a great healer, but what if the  pain and suffering from crimes committed against you are too cruel to ever heal. What happens when you simply can't forgive and forget?

This is a great little tale that shares some similarities with the ancient fairy tale - The Ugly Duckling - but with a very dark take! Phaylen Posford was tragically injured and wants only to be accepted into society, but it seems her life is cursed.

Is there a way to break this curse? Or must she suffer for ever?