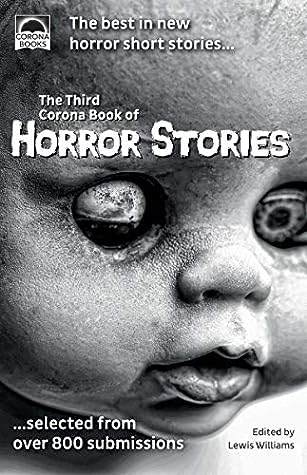 I finally got round to reading this one and I'm so glad I did, this is a superb collection of 18 diverse horror tales. I liked every one of these and there were a few that I thought were really outstanding.

What I liked about this collection were that the stories all stood out, each one's an individual. There's a huge range of horror from straight up splatter punk to folk horror and deep psychological all united by a dark thread. There's something in here for everyone. I really enjoyed this collection and actually felt a bit sad when I realised I had gotten to the end!


Can't wait for the next instalment!

Suds and Monsters by Christopher Stanley

Beware the wrath of an evil step-mother. This tale will leave you terrified of everything, including the kitchen sink. A great story to start off this amazing collection of horror tales.

The Debt  by John Haas

When Gary Jones wakes up he doesn't know where he is. He has no recollection of the night before. He fears his weakness for alcohol has lead him to a dark place. Gary has a debt and now its time to pay it back.

I don't want to say too much about this tale and spoil it but I will say this was one of my favourites of the collection. A really powerful tale, it deals with some really dark grim subject matter but yet the ending is satisfying.

This tales reminds me of Indiana Jones except the expedition has gone very wrong. Two treasure hunters decide to loot the bounty of ancient gods whom have been long forgotten. Problem is, they have little understanding of the ancient tribe's customs and rites.

Curious if Anything by C.C.Adams

One day a ghost turns up in a man's bathtub, he's not scared just curios if anything. He spends the next few days trying to figure out who the ghost was and what it wants with him. I loved this tale from beginning to end. Creepy and unsettling the ending is as brutal as an executioner's axe.

Cancer the Crab by Lewis Williams

Nature fights back when a fisherman takes too much, doesn't he know the sea can be a very cruel mistress when vexed?

A series of gruesome murders displaying the infamous grisly techniques of the bloodthirsty Vikings all centre around one man. A dark tale of what people will do to accumulate power.

Believe and Be Justified by Felix Flynn

A worshipper is about to meet his god blinded by religious fervour. It is the pilgrimage of a lifetime. He will do anything it takes to prove himself before the eyes of the almighty.

The Haunting of April Heights

I really liked this one, I'm a sucker for haunted house tales. This one is set in 1980's Britain. A young woman after a bad break up moves into April Heights a run down tower block on a council estate plagued with high crime and deprivation, but it offers a great view of the city and her best mate Sooz lives just next down. Even after warnings about the previous occupants she's eager to move in. She loves her new flat but her dog isn't so keen.

Daddy and daughter are united in their fight against the curse of sinners wreaking havoc upon Earth. Daddy calls her his "Little Angel" and she will fight for him until the very end. A really powerful tale.

Another one of my favourites. A collector becomes enthralled with a set of grisly murders in his local area, before he knows it he's in too deep after a lucrative opportunity from a local detective.

The First Circle by Sue Eaton

I loved this strange little story. I could really relate to the ever growing problem of what to buy your other half for their birthday. The longer you're together the harder it gets, you have to think more creatively which is exactly what happens in this tale. This wife makes a bad decision when she buys a very strange object for her husband.

The Barber by P. Sessler

This tale starts out innocent when a barber takes on an apprentice for his expanding business but descends into gore and macabre desire for the ultimate customer satisfaction.

Luna Too by Jess Doyle

A brilliant folk horror tale. Luna goes on holiday with her parents to a remote cottage named Ty Dewlin. The caretaker explains in means Warlock House named after the War Lock who once built and lived in the cottage hundreds of years ago. It is a cottage with some strange superstitions.

A farm girl forms an attachment to one of her animals but all too soon it is time to say goodbye. Let me tell you this, it's no ordinary farm! A deeply unsettling tale. I loved it!

A Little Death by Ryan Harville

A man's life is thrown into chaos by the untimely death of his beloved wife. He cannot cope without her and soon becomes lost in his own world. Can anyone save him?

A dark tale of obsession and murder, what really goes on in your kid's bedroom? Remember computer games aren't always just games, sometimes they're gateways.

Forgotten by his mother during childhood a man grows so lonely he will turn to anyone for love and affection. His virtual assistant Cecily is there for him in ways he can't imagine.

This was my absolute favourite from this amazing collection. Jimmy and his younger sister Katie go off exploring in their local neighbourhood when they come across an abandoned barn perfect for a secret den. When they get closer they realise it's not as empty as they first thought. Inside are three strange children that make the twins from The Shinning look cuddly and cute.

A slow building tale of terror made all the more terrifying when you realise what the shadow is!