Tales From the Shadow Booth Vol 3 edited by Dan Coxon 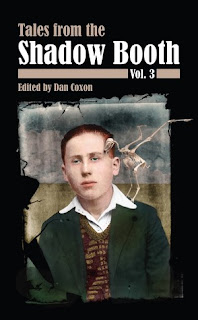 "Jared can feel the tower blocks looming overhead, three concrete sentinels watching as he runs. He knows he has less than a minute before his pursuers are on him, but as he rounds the corner into the alley he stops, dead. There's a strange canvas structure propped against the wall, a hand-made sign scrawled on a scrap of cardboard.Enter the Shadow Booth, it says, and you will never be the same again."


This is the third offering from The Shadow Booth. I loved the two previous volumes and was really excited to get my hands on this.

In the Shadow Booth you'll find a collection of 11 strange and twisted tales. These aren't horror or dystopian but somewhere between the two. These are those wonderfully "out there" hard to classify stories that stay with you long after you have finished reading them.

On the whole I really enjoyed most of the stories here, I have to admit there were a few that didn't quite do it for me, but that's to be expected with an anthology. I believe there's a something for everyone in here.

In my opinion the stand out tale for me was The Cherry Cactus of Corsica by Verity Holloway. This tale was a remarkable feat of imagination and execution. I just loved it. It follows the tale of Kurt who feels drawn to one of his students who shows great talent and promise but is deeply troubled. He only wants to help but is unable to resist being drawn in to a dire situation he cannot escape from.

Also up there in my favourites was Cousin Grace by Jill Hand. I've read quite a few of her stories over the years and they are always superb. I loved the opening paragraph which was both charming and sinister!

This was a really original tale and Jill Hand delivers an emotional punch. I really cared about these two girls who only had each other in life and when Cousin Grace disappears into the Dream Room only the narrator seems to care.

Meat By Judy Birkbeck was another really great tale of Fenella who moves to a new town with her daughter Saskia in search of a new life. I loved the vivid descriptions used throughout and the brooding creepy atmosphere which really felt like the calm before a storm. It definitely felt like there was something strange about this town!

Hermit Island's Hermit by Armel Dagorn was a really short but creepy tale about a young man's expedition to a remote island revered by local folklore. Will he be able to return once he sets off in his canoe?

I Have a Secret by Raquel Castro was a brutal tale of family loss told through the voice of a child, Milo . Haunting it depicts the tale of a very sick mother coming home from hospital, things will never be the same again. Milo suspects something is underfoot but no one will listen.