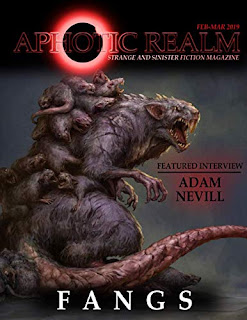 Aphotic Realm are back with their sixth issue which also marks their two year anniversary!  I've been reading this magazine right form the beginning and each time they really deliver!

I'm a huge fan of this magazine, no matter what the theme is, I've enjoyed everyone of them. So far there's been; Apparitions, Banished, Classified, Dystopia, Eldritch and now Fangs! (The next issue, which I'm particularly looking forward to, will be Gruesome!)

In this issue there's a really great interview with the undisputed king of horror; Adam Nevill. A really cool feature article by Toni Miller from the amazing Ladies of Horror Fiction Team. Also featured is a fang inspired comic called Black Dog, and some great work by Russell Dongjun Lu.

You won't find tales of Vampires inside here but you will find creepy animals and critters waiting to jump out at you! I have to say as usual all the stories in here are brilliant, there's something in here to scare everyone, I loved them all.

Black Fur, Red Fangs by Kenneth Tilford kicks off this excellent anthology with a great American horror flavour. I really enjoyed this tale there was a great atmosphere of dread and foreboding terror in this tale where night time creatures take aim at an isolated community.

I really loved The Waiting Game by Kev Harrison this was a really dark tale that I loved from beginning to end. A really original choice for a fanged creature!  Liam's pissed off his girlfriend and he's going to really regret it. Really well written with a really cool ending, gory and fun!

Then there's my story, Mother's Ruin by S.J.Budd. Trey and Damon think they have found a easy prey in the new boy at school who's just a little bit weird. But don't they know it's the quiet ones you have to watch out for.

Infestation by Chris Martin builds up the fear straight away by setting his story in the middle of nowhere. A farm is devastated by an unusual infestation. Soon its not just the farm David Chapman has to worry about but the survival of him and his family.

It's been a really long time since I read something as original and WTF as Her Special Sauce by Joanna Koch. It pulls you in from the very first sentence and doesn't let you go. Beth's come up with a novel money making idea and nothing is going to stand in her way.

A monastery set high on mountain deep in jungle is a place of great pilgrimage but it hides a dark secret. Taranto by Michael Carter explores how far people will go to protect their secrets in a really creepy way of course!

If A Murmur of Shadows  by Tom Over doesn't strike fear in your heart at the thought of nature taking revenge against us for climate change then nothing will, unless there's a real life apocalypse. A brilliant tale with a very powerful ending.

And lastly, Two Weeks to Wolf by Christopher Stanley. Not even powerful weapons like guns can save us from the wild creatures that stalk us. Some things are best left undisturbed.