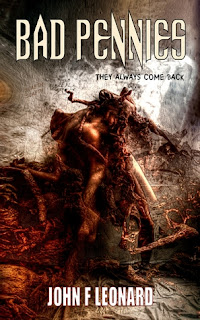 I chose Bad Pennies after reading Call Drops also by John F.Leonard, a short horror story which was really creepy, imaginative and highly enjoyable. Bad Pennies is set in the same world and does not disappoint!

Seeing a stranger die is the worst thing that Chris has ever witnessed. Picking up the dead man’s wallet is a mistake, a moment of weakness.
That’s all it takes, one impulsive act, for reality to unravel.
Because pocketing the wallet is only the beginning.Dark forces swim below the surface of the world...They change their shape but never go away...They find a way through...


Chris Carlisle is just an ordinary guy, always suffering from too much month at the end of his money. He's flat broke, his job is a dead end and his boss hates him. He's one warning away from getting fired. The only thing that is goo din his life is his beautiful Becca and for her he would do anything.

He doesn't think his life can get any worse, but it can.

One morning, late for work he witnesses something extraordinary. He thinks his luck is finally changing when he finds a wallet full of cash. He almost doesn't pick it up but he's so poor he has little choice in taking it.

This book starts off a little slow but its worth it as once it gets going, events move quickly. There's a great foreboding atmosphere and a real treat for those who like their horror extra dark! I loved The Thin White Man, he was genuinely scary and if you don't have a great tolerance for creepy crawlies you may find this book a little extreme!