Valley of Embers by Steven Kelliher

For hundreds of years, the flame-wielding Embers have been the last line of defense against the nightmare creatures from the World Apart, but the attacks are getting worse. Kole Reyna guards Last Lake from the terrors of the night, but he fears for his people’s future.

When Kole is wounded by a demon unlike any they have seen before, the Emberfolk believe it is a sign of an ancient enemy returned, a powerful Sage known as the Eastern Dark.

Kole has never trusted in prophecy, but with his people hanging on the precipice, he reluctantly agrees to lead the Valley’s greatest warriors in a last desperate bid for survival. Together, they will risk everything in search of a former ally long-thought dead, and whether Kole trusts him or not, he may be the only one capable of saving them. 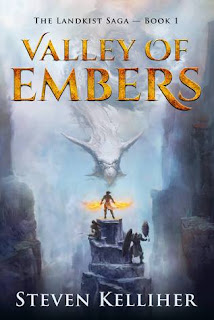 Valley of Embers is a powerful  debut by Steven Kelliher which is incredibly  fast, fantasy fuelled and action packed, despite being set in another world there is no info dumping which is a big pet hate of mine. I have to admit the start of the novel was a bit slow, but it's definitely worth persevering with. The style of writing is really very good and I loved the little extra touches such as the names for all the chapters.

Without wanting to give away too much of the plot and ruin it for those who have not yet read this, the action starts off very quickly and the plot is constantly changing keeping you on your toes and exhilarated. There are big changes going on in the world beyond the valley and only Kole seems to be aware of this. This book also has a great feel of old school fantasy with evil magicians and fey folk!

There's a lot of magic in Valley of Embers which I love in books and it is fresh and original. The tale is told through different viewpoints which gives the reader a big scope of the story. I like how the characters are not simply divided between good and bad which makes them feel human.

All in all a great debut and I'll be waiting for the next instalment!